A journey around the digital asset sphere…

Our Digital Asset Research Team shares an overview of developments in the crypto world during the last 8 weeks in this week’s Strategic Perspective. The digital asset sphere was marked with intense emotions and particularly contrasting headlines. But nothing is ever as it seems, so let’s dive a little deeper… 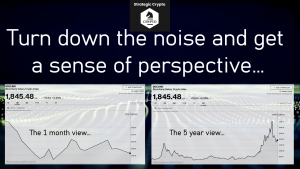 On June 9 2021, El Salvador became the first country in the world to officially adopt bitcoin as an official currency. This means that every business in the country will have to accept bitcoin as a form of payment for goods or services. El Salvador even went so far as to offer every single citizen $30 in Bitcoin to help jumpstart the development. This event has the potential to spark a domino effect as other countries may soon adopt digital currency. It may also have effects on the World Bank and the IMF which will encourage macro level adoption and growth of cryptocurrencies.

While the news of El Salvador points to further adaptation of these digital assets, crypto has also been facing some bumps in the road, such as the energy concerns around Bitcoin or China’s take on cryptocurrency mining. In short, the function of bitcoin mining is to add and verify transactions between users to the blockchain public ledger. China has been the dominating force in global bitcoin mining (an estimated 65% of all mining originating there). After announcing that they are cracking down on cryptocurrency mining, many of these miners began shutting down operations and migrating to nearby countries like Kazakhstan.

Throughout these discussions it is worth pointing out that China has not banned the ownership of cryptocurrencies nor are they discouraging the technology in any way. Instead, the government is trying to establish a digital currency for itself, the “digital yuan”. China will distribute 40 million renminbi ($6.2 million) of its digital currency to citizens in Beijing in a lottery. The country has yet to do a nationwide rollout of the digital yuan, which it has been developing since 2014.

For the most part of June, Bitcoin and the overall cryptocurrency market stayed in a sideways price range, with prices fluctuating between $30,000 and $40,000. However, within this range, Bitcoin experienced significant volatility throughout the month. Bitcoin fell by 5% whilst Altcoins suffered significant more. The May/June crash is therefore the most significant pullback since the Covid-19 crash in March 2020

All of these events have resulted in an environment of extreme fear. According to the classic sentiment gauge, the Crypto Fear & Greed Index, market participants remain cautious and in quite an ‘extreme condition’ . The last time the market expressed this depressed sentiment for a similar period of time was during the Covid-19 crash.

While the general mood of the crypto market leans towards negative / bearish, Glassnode, a blockchain analytics firm, suggest that the bull market is still fully intact. Key indicators like NVT, user growth and the Stablecoin Ratio give hope for a recovery in the second half of the year.

We can see countries and corporations all over the world race to incorporate cryptocurrencies into the market. Brazil’s largest stock exchange listed its first bitcoin ETF in Latin America while Cathie Wood’s ARK invest has initiated its own Bitcoin ETF. Now that there are multiple crypto ETFs trading on stock markets (from the north all the way to the south), it is a wonder why the SEC keeps delaying its decision to approve an ETF in the United States. Arbitrary delays on the VanEck or Valkyrie Bitcoin ETF supports the suspicion that we might not see any developments on this front anytime soon.

US-based enterprise software company, MicroStrategy, bought another round of about 13’005 bitcoins for $489 million. The purchase follows MicroStrategy’s raising of $500 million from the sale of debt to specifically fund buying more bitcoin. The Michael Saylor-led company further intends to sell $1 billion in shares to finance buying even more bitcoin. The company spent the last year steadily amassing more bitcoin after making its first investment in August.

The German Fund Location Act, which was introduced in April, came into effect on July 1st. Germany therein allows 4000 special investment funds – managing around 1.8 trillion euros – to invest up to 20% of their capital into bitcoin and other crypto/digital assets. Regulators seem to be sending the message that they will allow crypto investments and give digital assets some room, as long as they are subjected to some regulation. This new regulation applies to a certain type of alternative investment fund called ‘special funds’ (Spezialfonds – Offene-AIF), which until recently, have not been allowed to invest in the space. Although we must note that alternative special investment funds like these are only accessible to institutional investors, not the general public.

Other regulatory agencies throughout the world are also increasing their activity in the space. The Financial Conduct Authority in the United Kingdom (FCA) joins Canada and Japan in banning Binance, the largest cryptocurrency exchange in the world, from operating within its borders. The FCA ordered the company to take down all advertising and to display a prominent notice on its website saying it is not permitted to conduct business in the UK.

Meanwhile, in the United States the FED has put their attention on Stablecoins.

Members of the Federal Reserve are becoming aware of Stablecoins and the massive market these pegged-assets have created. During a presentation dubbed “Financial Stability,” Boston Federal Reserve president Rosengren highlighted Stablecoin markets as a “periodic disruption to short-term credit markets.” Fed Vice Chair, Randal Quarles has expressed more support for Stablecoins than some of his colleagues. Quarles noted that the U.S. central bank has a “strong regulatory interest” in Stabelcoins and said there is no need to fear them and that they should instead embrace them – particularly if Stablecoins are fully backed by central bank reserves and short term government bonds. Former head of the Bank of England, Mark Carney, expressed similar views.

Today, statistics show that there is $111 billion in Stablecoin capitalization amongst the long list of these types of tokens. Tether (USDT) is by far the largest Stablecoin in existence and has a valuation of $62 billion.  Behind Tether is a USD Stablecoin (USDC) which is issued and maintained by the company, Circle. USDC has a $25.8 billion capitalization and between both USDT and USDC combined, the two Stablecoins represent 79% of the entire $110 billion Stablecoin market cap.

Even though regulations and government influence contradict the idea behind Bitcoin and cryptocurrency, mass adoption can only occur if a specific regulatory foundation is, in fact, established. It is also clear that a regulatory basis can only be achieved with certain trade-offs. Governments will make crypto owners declare their digital assets and will also impose taxes on them. Crypto holders will be obliged to do a KYC. None of this will destroy the value in Bitcoin nor will it stop the technology revolution. The regulations will be able to integrate it more which is what real adoption is about.

Total Locked Value (TVL) in Decentralized Finance (DeFi) sits at over $100 billion according to DefiLama it’s becoming evident that DeFi is not just a gimmicky play for crypto insiders.

The financial world is witnessing a revolution. In the previous centralized structure, banks and other financial institutions were (and are being) required to comply with government and other legal jurisdictions before processing any transactions. Decentralized Finance is disrupting that process by replacing middlemen with peer-to-peer technology, thereby lowering costs and speeding up transactions. In simple words, DeFi is ending the role of institutions for transaction processing and contract creation.

Decentralized finance has even caught the attention of the world’s largest e-commerce marketplace, Amazon, who recently went on a blockchain hiring spree. It will be just a matter of time before big tech actually makes their first big steps in the crypto world.

In what is considered as one of the most significant developments in “institutional DeFi” recently, Compound (a decentralized, blockchain-based protocol that allows you to lend and borrow crypto), has announced a new product called Treasury Accounts. It is designed for non-crypto native businesses and financial institutions to access the benefits of the Compound protocol and allows non-crypto clients to earn 4% APR on fiat deposits. This new offering is the result of a partnership with crypto custody firm, Fireblocks and with Circle, which issues the USDC Stablecoin.

While actively managed strategies have the potential to generate far higher returns and yields, this offering is another important step towards mass adoption and will create further opportunities in the thriving DeFi sector.