While wheat prices have garnered significant attention since the Russian invasion of Ukraine, corn has arguably been the agricultural commodity most affected by the war. In 2021, Ukraine was the third-largest corn exporter in the world, accounting for 11.4 percent of global exports. Even before the war started, restrictions on Belarusian fertilizer exports and generally elevated fertilizer prices (you can click here if you missed our deep dive on that subject), it was looking like an interesting year for corn. Indeed, for just the third time in history, the U.S. Department of Agriculture (USDA) projected that U.S. farmers would plant more soybeans than corn due to the high price of fertilizer. Add in an ongoing drought in the Southern Cone and you’ve got a recipe for high prices. 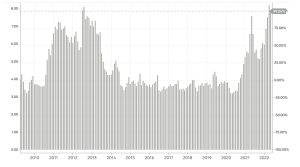 In April, corn prices obliged, with prices surpassing $8 per bushel, the highest level in over a decade. Since then, however, corn prices have taken a breather. U.S. growing conditions still aren’t great…but drought status in the U.S. is now slightly more favorable for the Corn Belt. Brazil and Argentina saw more favorable weather conditions too, though these have turned out to be fleeting as concerns mount that Brazil’s second corn crop could be threatened by lack of rainfall or even frost. The European Commission also threw its weight behind an initiative to get Ukrainian corn out of Ukraine by road and rail rather than by Ukraine’s blocked sea ports, through which 98 percent of Ukrainian agricultural exports usually exit.

Where the corn market goes from here is less certain. The latest USDA report published in May calls for lower production, trade, and ending stocks – but also lower consumption. Indeed, according to the USDA, declines in crop yields in Ukraine, the U.S., and the EU will be offset by production in Argentina and Brazil despite drought conditions. The drop in consumption is based on downward revisions on Chinese consumption due to China’s COVID-19 lockdowns. It would seem however that China is not taking any chances, as it announced a tentative agreement with Brazil to boost Chinse imports of Brazilian agricultural commodities, especially corn (which China has historically imported from the U.S. and Ukraine) as well as soybean meal and peanuts. 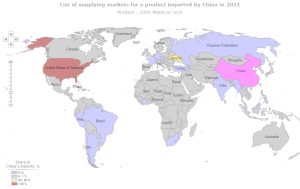 The outlook for corn is uncertain, and much hinges on Russia’s war in Ukraine. According to Interfax, Russian Deputy Foreign Minister Andrei Rudenko indicated that Russia was willing to set up a corridor for Ukrainian ships exporting food in return for the lifting of some sanctions against Russia. There are even reports that Russia has already allowed civilian vessels to use the port at Mariupol. The news comes just a few weeks after UN Secretary General Antonio Guterres has floated a proposal to end embargoes on exports of Russian and Belarusian fertilizers in return for Ukrainian port access. Ukraine is having none of this talk — Ukrainian President Volodymyr Zelenskyy has rejected and criticized any notion of compromise or a resumption of negotiations until Russia withdraws its troops from all of Ukraine. 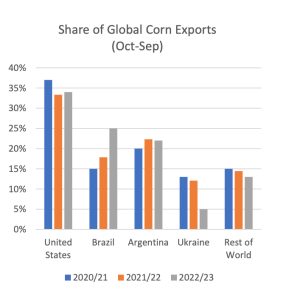 In a best-case scenario, Russia allows Ukrainian agricultural exports to exit the Black Sea and Ukraine receives Russian/Belarusian fertilizer to plant for future seasons. Even if that does happen, though, the U.S. has been revising its corn yield down since the start of the year – 4 bushels per acre below what the USDA estimated in its Agricultural Outlook Forum in February. Meanwhile, South America’s bad weather luck continues. Argentina extended its Water Emergency Crisis for another six months due to insufficient rainfall in the Paraná, Paraguay, and Iguazú river basins. The state of emergency has been in place since July 2021 and has impacted hydropower output and Argentine grain exports. Meanwhile, weather forecasters are beginning to talk about a “triple-dip” La Niña, which would mean yet another year of below average growing conditions in key corn exporters.

If corn does keep up its wild ride, it will be breaking historical trends – and many analysts think corn will continue to trade at historically elevated levels for the remainder of 2022 and 2023. It would be wrong to say this is historically unprecedented territory…but it is still not normal. Since the agricultural revolution in the 19th century and World War I, the world has steadily driven down the price of major cereals like corn and wheat due to advances in technology that have increased yields. Compared to the price of energy (see above), the price of cereal crops like corn and wheat have been in a steady decline. This predictability and the openness of global agricultural markets has led to centuries of demographic growth and is the unappreciated foundation of the global economic system. 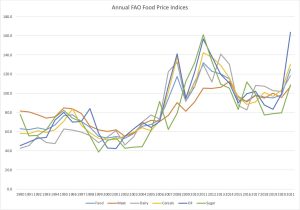 And yet, as is visible in the chart above, the last time cereals prices peaked like this in 2010/2011, it was an ephemeral price action. As we’ve discussed in this commodities series often, timing is critical when it comes to understanding cyclical markets like corn. The level of attention on higher corn prices as a result of the Russia-Ukraine war is also generating significant interest in corn prices from investors and traders who do not know the corn market well or understand its fundamental price structures. In the meantime, the combination of a shrinking South American crop, delayed U.S. planting, and strong margins for ethanol production continue to support elevated prices…but for how long? According to a recent study published by the University of Illinois (click here to read), there is a 25 percent chance corn prices will be above $7.59 in October – not a market for the faint of heart.