A generational shift is powering a significant wealth transfer…First to women & then the younger generations.

In this week’s Strategic Perspective, we explore the demographic forces driving a paradigm shift in the control of US wealth and some of the broader effects for financial markets this decade.

US wealth (& power) on the move across generations…

In 2017 we crossed a threshold with over 50% of the US population having been born after 1981 – Millennials and Gen Z became the majority. In the 2020 elections they were a larger block of potential voters than the Boomers for the first time. They are behind many societal and cultural changes. They have been driving consumer trends for a while and their preferences will only become more and more pronounced. This also goes for financial markets and services. Investors and the financial industry should take note and action.

Millennials & Gen Z are already make up more than 50% of the US population. 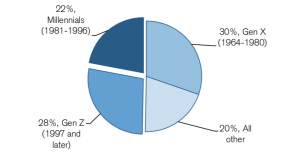 At the end of Q1 2021, people age 70 and above had a net worth of nearly $35trln according to Federal Reserve data. That amounts to 27% of all US wealth. Their wealth is equal to 157% of US GDP, more than double the proportion 30 years ago. According to Cerulli Associates older generations will be handing down around $70trln between 2018 and 2042 with roughly $60trln going to their heirs – increasingly Millennials and Gen Xers (Don’t forget about us please…) – with the balance going to philanthropy. 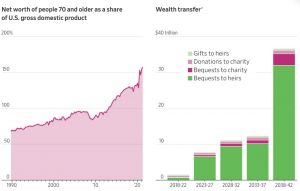 Before the wealth is past to the Millennials and Gen Z it will in many cases go to the female spouse. According to a McKinsey survey, men are the key financial decision makers in two-thirds of affluent households in the US. However, this is changing. Today women control a third of household financial assets – more than $10trln – and over the next decade this transition will only gather pace. Approximately 70% of US affluent-household investable assets are controlled by Boomers. As men pass, many will cede that majority of these assets to their female spouses, who tend to be both younger and longer lived. In the US women outlive men by an average of five years, and women marry partners that are roughly two years older. By 2030, women in the US are expected to control much of the $30trln in financial assets that Boomers possess. That’s a wealth transfer of such magnitude that it approaches the annual GDP of the US.

Currently women in the US control around $11trln in assets this could more than double this decade.

When the majority of the electorate is facing heavy debt burdens, the uncertain employment formats of the so-called Gig-Economy, and has only a sliver of the wealth pie, it seems certain that these newly empowered groups will be looking to address these issues. They will do this by electing people who will hasten a broader wealth transfer through fiscal and tax policies that favor their group. This means more debt and as a result debt monetization.

What does this mean for investment markets?

These groups are digital natives with strong values so expect exponential growth in the drive towards digital and ESG aligned assets. As wealth flows away from some areas of the traditional asset classes and industries other areas will benefit – investors better “skate to where the puck is going to be” or face a rude awakening.

Financial service providers will need to bridge relationships with the family of the often male “founder” from the Boomer generation, and they will need to be able to communicate effectively with and meet the expectations of these new client groups. Surveys shows elevated turnovers of advisors within the first couple of years a wealth transfer – this is both risk and opportunity for financial services companies. During the last two decades in the US and globally tech and innovation has been the driving force for creating wealth both for entrepreneurs and investors. This trend is only set to continue and will be revving up as we move towards addressing some of the major challenges and bottlenecks in our economies.

In the US, new tech-driven wealth exploded throughout the 1990s… 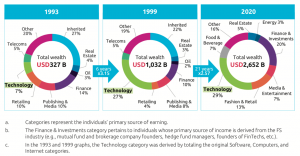 The move to real assets, including digital assets AKA Crypto, should also accelerate. Crypto and especially the DeFi space is an extension of the major FinTech trend powering through the last two decades. The continued overall move to the digital economy will drive this even further. The awakening of the investor herd as they feel the heat of the smoldering currency debasement taking place all around them should also lead to a stampede into real assets with enduring qualities including the Crypto sphere.

A mix of the new with ancient forces as old as man will lead to increasing demand for, and short supply of, assets with inherent permanence as well as for businesses with enduring qualities that can weather the storm and regroup and prosper in a changing world. Investors today should be on the lookout for both, so they can harness these powerful winds of change.