In this week’s edition Jacob Shapiro, our Global Macro Adviser, takes a look at China’s latest demographic numbers and ponder if the commentators are focusing on the wrong problem.

China doesn’t have a population problem. It has an inequality problem.

China released the official results of its seventh national census on Tuesday. Breathless media leaks last month suggested that China was poised to report a population decline, but those reports turned out to be inaccurate. Instead, China’s population notched a small gain, up to 1.41178 billion and a 5.38 percent increase from the 2010 census.

Even so, Chinese births declined for a fourth consecutive year. Overall, China’s total fertility rate declined to just 1.3 children per woman. One economics professor at prestigious Peking University even told Chinese state media that “Without strong policy intervention, China’s new-born population is likely to fall below 10 million in the next few years, and its fertility rate will be lower than Japan’s, perhaps the lowest in the world.”

Cue the chorus of hot-takes from analysts, announcing the imminent demographic collapse of China. China’s does indeed have a serious population issue. While most of the developed world is facing low fertility rates and declining populations, roughly thirty years of the “One-Child Policy” has exacerbated the issue for China and led to dire population predictions like this one from the United Nations: 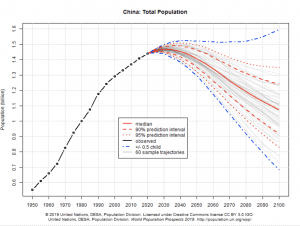 And yet, the global herd of group think doth protest too much, methinks. For one thing, demographics is devilishly hard to predict, and as the UN’s probabilistic study above shows, even a 0.5 increase in the total fertility rate could go a long way to easing China’s crisis. For another, while aging populations do indeed weigh negatively on growth prospects, a shrinking population has not always been a sign of weakness of imminent collapse. Quite the opposite. In 1930s Germany and 1980s America, there were similar fears of imminent catastrophe brought on by lower fertility rates and shrinking populations. One doesn’t have to be a student of history to conclude that demographic pressures aren’t as predictive as some like to think.

China’s real challenge is much more difficult to solve than having more babies. For all its economic success, China is still a relatively poor country. GDP per capita in China was just $10,216.6 in 2019 – below such economic heavyweights as Russia, Panama, and Venezuela. China’s GDP per capita is also much lower relative to its success than Japan’s was in the 1990s – when Tokyo was beset with its own perfect storm of imminent population decline and the collapse of its export-oriented growth model.

Japan famously enjoyed a “Lost Decade” in the 1990s – which, ironically enough for China, would represent a base-case scenario for Beijing in the near-term. Japan was able to deal with slowing growth and a declining population in part because it was so wealthy by the time the demographics winds began to shift. China is trying to pull off a similar transformation while starting from a relatively less wealthy position whilst fighting a trade war with its biggest customer and once-partner, the United States. Japan had to deal with its fair share of irrational U.S. fears, to be sure, but nothing on the order of what China is dealing with today.

The strategic perspective here is to see beyond the topline demographic and population figures and to focus instead on the real center of gravity: China’s inequality issues and the efficacy of Chinese government policy to “spread the wealth” whilst avoiding the kind of political and social upheaval that has defined most modern Chinese history when things aren’t going well. Whether China is up to the task or not remains an open question for now; in the interim, however, avoid making any decisions based solely on the idea that China’s population is shrinking. It is – now get back to more serious work.

Our Crypto Market Analyst, Toa Lohe looks at Ethereum and the power of systems.

Frederick Winslow Taylor wrote in Harvard Business School’s bible, The Principles of Scientific Management, “In the past the man has been first; in the future the system must be first.” Ethereum, a decentralized, open-source blockchain, might be that system. Decentralized finance applications, non-fungible tokens, and smart contracts written by European banks (Link to article on EIB) have boosted its relevance. Months ago, Vitalik Buterin, co-founder of Ethereum, wrote about legitimacy: “Cryptocurrency is powerful because it lets us summon up large pools of capital by collective economic will, and these pools of capital are, at the beginning, not controlled by any person. Rather, these pools of capital are controlled directly by concepts of legitimacy.” Legitimacy is incredibly important in the world of finance. In fact, the New York Stock Exchange (NYSE) grants legitimacy to listed companies. Kevin Werbach, an Associate Professor at the University of Pennsylvania wrote “Seeing that a company is listed on the NYSE is evidence enough to respect its legitimacy. You do not need to know anything about the member organizations of the exchange or its governance mechanisms to feel confident enough to purchase a stock listed on it.” A number of thoughtful investors and founders have invested in Ethereum’s future. In the coming decades, the dollar’s rival and our entire financial system may be operated via the Ethereum blockchain or something similar but further evolved, untethered from the traditional sources of legitimacy – the nation-state and it’s institutions – yet still seen as legitimate by the participants of the system due to its inherent superiority. 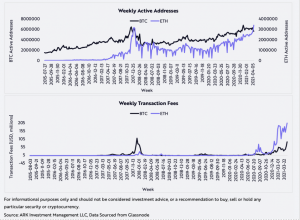