Copper: The Red Metal of the Future or Runt of the Portfolio?

Humans have been using copper for millennia. Due to its malleability, high thermal conductivity, resistance to corrosion, and most importantly, its occurrence in nature in a directly usable metallic form, copper usage was an early mark of civilization and a necessary step on the path to the bronze and iron ages.

Over the centuries, humans have found new uses for copper, from sheathing the hulls of wooden ships in the 18th and 19th centuries to the battery in whatever device you are reading this on right now.

Copper’s biggest usage today, however, is in construction. The boom in the price of copper in the 2000s owed much to a huge swell of demand in China, which has been building non-stop for over two decades to encourage urbanization, provide electricity for its rural hinterlands, and to artificially prop up its overheated economy.

In the last year, the Chinese government has started to crack down on inefficient and speculative use of resources like copper, as well as to intervene in commodity markets to manage prices. That doesn’t mean, however, the demand for copper is set to decline.

For one thing, large swathes of the developing world hope to take a page out of China’s playbook. According to a 2018 UN study, just 55 percent of the world live in cities – a proportion that will increase to 68 percent in 2050. That’s a lot of building to come!

Find Yourself a City to Live In 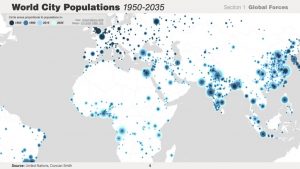 Even more significant however is the embrace of renewable energy technology in both the developed & developing worlds, as well as a paradigm-shift in investing toward a preference for environmental, social, and corporate governance, aka ESG. Copper is crucial to manufacturing electric cars, batteries, and renewable power generation, all of which should provide a powerful tailwind for copper demand.

Copper is Critical to ESG and Clean Energy… Of course, like all commodities, copper prices are cyclical. Human demand for copper is constantly changing and the law of supply and demand is about as close as you can get to a truth on our small and fragile planet. Commodity investing isn’t for the faint of heart or for the buy-and-hold investor, even one with an exceptionally long-time horizon.

Just look at the chart below. If you had gone long copper in say 1945, with a plan to hold your copper bets until retiring 20 years later, you would have been sorely disappointed with your lot. If you had sold at the peak of the Korean War, you would have done fairly well. And if you had “hodl-ed” 40 years you might have taken a loss (adjusted for inflation, of course). Indeed, before China embarked on its construction boom, real copper prices were at their lowest in over 150 years because humans had become so proficient at mining and producing copper. 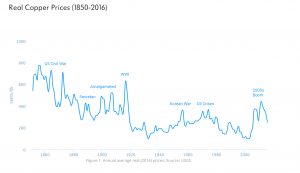 Of course, this chart ends in 2016, after the China boom began to peter out and as the ramifications of the 2008 financial crisis became apparent. Copper rose a little bit after 2016, before surging in 2020, along with many other commodities. (We took a close look at lumber, another important commodity in construction, here.) To make money investing in a commodity like copper, you must be able to discern when and how macro conditions force an evolution of how copper is consumed, but you also need to be a skilled enough trader to time the market appropriately, which necessarily means also knowing how to hedge your bets since no one is perfect at timing the market.

As the chart above shows, copper has enjoyed quite a run in 2020-2021. Only in the last month or two have copper prices started to descend back down to earth. The question now is whether, like in the example of lumber, copper’s brief surge was a result of idiosyncratic supply chain bottlenecks that, once resolved, will dampen prices, or whether the rise of urbanization in the developing world and the turn to ESG and renewable energy in general means that copper is only just getting started.

Rebounds in copper production would seem to suggest that prices may have hit a ceiling for now. Copper mine production rebounded sharply in 2021 and is expected to continue to increase by roughly 3 percent annually through the end of the decade. 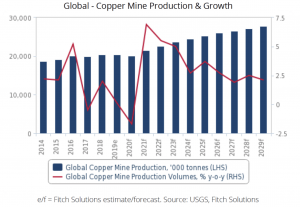 In Chile, workers at the Escondida mine – the largest copper mine in the world – recently threatened a work stoppage because they wanted a bigger share of BHP’s profits. It got them – to the tune of ~$30,000 per worker. Is that a sign that Chilean copper mine workers believe their leverage is greatest now when prices are high? Is BHP footing the bill to avoid a strike a sign that the company believes copper has a lot more room to surge and therefore is willing to pay off workers to avoid a work stoppage? These are the sorts of questions that should keep interested investors up at night.

Even though copper production is increasing, many projections suggest it is not increasing enough. On paper, there is technically more than enough copper in the world to meet demand, and the USGS estimates that undiscovered copper resources could number over 3.5 billion tons. Copper, unlike other critical commodities, is also relatively recyclable. That is one of the qualities that has made it so attractive to humans over the millennia. Even so, IEA projections indicate that a significant gap between production and primary demand will arise by the end of the decade, with demand potentially outstripping production by as much as ~60 percent. 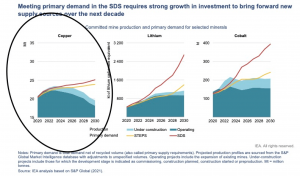 The part of the graph above that should disturb you is the decline of operating copper production. Even though copper production is 30 percent greater today than a decade ago, production at many of the world’s largest copper mines has decreased considerably. In Chile, which accounted for 30 percent copper ore exports last year, the average grades of concentrate have decreased by 30 percent. (Yes, that’s a lot of 30s – a coincidence, not a typo!) According to the IEA, the copper continent in Chilean ore is now just 0.7 percent. In practical terms, that means mining copper is getting costlier, which will also increase prices.

This is not just a Chilean problem – ore grades at major copper mines in Australia, Canada, the U.S., and Peru have also declined. Growth in production will have to come from places like Peru (where new President Pedro Castillo has threatened to nationalize mining interests), the Democratic Republic of Congo (a geopolitical nightmare) and Indonesia. There may be enough copper in the world but it is getting harder and costlier to reach.

There’s a lot of copper out there, but the quality is declining… 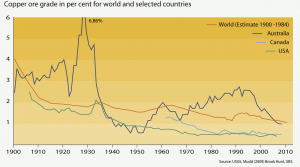 One thing is for certain: human civilization will continue to use, and even rely on, copper. Even if Chinese demand were to fall off a cliff (and, for the record, this analyst doesn’t think that will happen – quite the opposite – but that’s a perspective for another time!), the macro forces supporting copper demand over the next few years are robust. Absent a major new copper discovery or technological advance that makes mining or recycling considerably cheaper, there will likely be a serious imbalance between copper supply and demand at some point in the next decade. Add in the risk of a geopolitical black swan event like, say, Peruvian nationalization of copper mines, and the risk-reward looks even juicier.

With these supply/demand factors presenting themselves across most of the commodity space, combined with climate factors (water is an important input for mining) and broader macro aspects such as inflation/currency debasement, being invested in commodities in a smart and flexible format is looking very attractive for this decade and beyond.  It’s time to get real.