Climate change arrived at the Pacific Northwest this past week in the form of historically unprecedented heat wave. Temperatures in Seattle hit 112 degrees Fahrenheit and in one town in British Columbia nudged just shy of 115 degrees. For some frame of reference, the highest recorded temperature in the history of Austin, Texas is 112 degrees.

The heatwave underscores precisely what makes climate change such a difficult risk to account for. The impact of a climate change event can be overwhelming – and the lead time to prepare can be very short. For all this analyst knows, a hurricane will form in the Gulf of Mexico in the next two weeks and completely change the U.S. Gulf Coast for a generation.

Case in point: here is what the National Oceanic and Atmospheric Administration (NOAA) predicted for temperatures in the U.S. for June 2021. Note that while the NOAA identified elevated risk for a warmer than normal month, for the most populous areas of Oregon and Washington, the probability was basically the same as a coin flip. 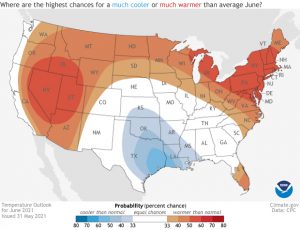 Here is how the situation unfolded in recent days. 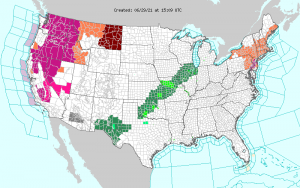 On the one hand, the NOAA predictions were relatively accurate at forecasting higher temperatures in the Northeastern and Northwestern parts of the country. And yet, that will be little consolation to residents of a city like Seattle, which was outside of the NOAA’s increased probability of warmer than normal temperatures.

A city like Seattle is ill-prepared for this sort of heatwave. Temperatures in this part of the world just don’t reach these heights. That’s why the majority of homes in Seattle don’t have air conditioning. While 91 percent of U.S. have air condition installed as of 2019, just 44 percent of Seattle’s homes do. Disasters like this heat wave tend to encourage sudden changes; expect an explosion of demand for central air in the Pacific Northwest over the next year, just as demand for generators surges on the Gulf Coast after severe hurricanes.

Note that the heatwave is not the only significant risk to be watching in this region. Vast swathes of the western part of the U.S. are facing exceptional drought. 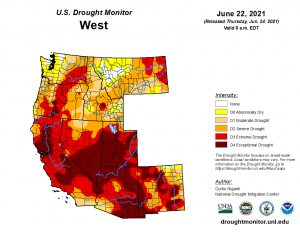 The concern over drought in the region is particularly worrying considering the outsized role southern California plays in U.S. food supply chains. Here is a map produced by a team of researchers that shows the most important routes for U.S. food commodities transportation in the U.S. 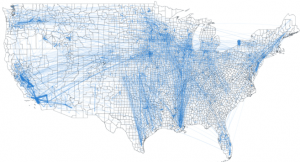 The U.S. simply isn’t adequately prepared for the kinds of risks climate change is going to pose in the coming years. A recent working paper published at the NBER showed that floodplain homes in the U.S. are currently overvalued by a whopping $34 billion. Losses from floods, hurricanes, wildfires, and other natural disasters have left homeowners in parts of states like Florida, Texas, and California with fewer choices for insurance, as the cost of providing insurance in risky areas is increasingly hard for insurance companies to bear. Indeed, the incident of billion-dollar disaster events in the U.S. has increased markedly in the last 40 years – and that’s not even accounting for the litany of smaller events. 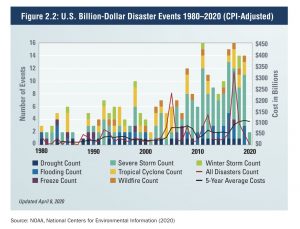 To add insult to injury, the geography of U.S. development poses especially significant risks for the country. According to the Bureau of Economic Analysis, as of 2018, just 31 counties accounted for almost one-third of U.S. gross domestic product. Take a look at the map of where GDP is concentrated in the U.S., and you’ll notice that almost every one of these major urban areas is on the coast. 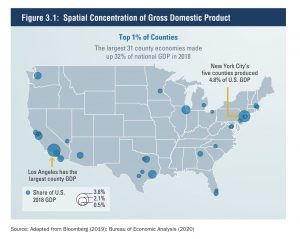 The consequences of the changes wrought by climate change are so macro as to defy easy summary. Insurance providers, for example, will have to start to think about climate risk similar to how banks approach mortgages, where disaster = default. The scope of the problem is likely beyond the ability of the market to handle and will require public-private collaboration.

As the esteemed U.S. historian Robert Caro said in The Path to Power, previous episodes of populism and big government in U.S. History happened “only when people found themselves at the mercy of forces too big for them to fight alone.” Climate change represents such a force, not least because of the myriad ways it can manifest, and the Damoclean sword it holds above all our heads.

We have lived in a world where natural disasters, while hardly predictable, could often be anticipated, and where their occurrence was sufficiently rare to not pose systemic threats to entire economies. That is beginning to change. Climate now is becoming more unpredictable, and natural disasters are becoming more common – indeed, too common for many industries to bear. What is good news for air conditioning specialists is potentially bad news for real estate developers and mixed news depending on the insurance company in question.

To identify the risks and the opportunity, you must be able to see this big macro picture – and then to focus on a very granular level about the specific area or industry you are assessing. In other words, always remember to stay cool, even when – especially when ­– it is 115 degrees outside.