In this week’s edition Jacob Shapiro, our Global Macro Adviser, takes a look at lumber.

It seems like everywhere you turn there is a new headline prophesying an imminent commodities’ supercycle. The impact much ballyhooed supercycle is nigh and the impact it could have on investors cannot be overstated. If this is the beginning of such a cycle, then there is a tremendous opportunity to go long everything from beef futures to iron ore. Add in over a decade (and counting) of low interest rates and profligate government deficit spending on a scale not seen since World War II and you’ve got a bullish argument for gold and cryptocurrencies as stores of value – and a recipe for currency debasement throughout the developed world.

Numerous commodities have seen their prices ascend skyward, even “to the moon,” in the language of the never-ending stream of memes. Copper futures for instance recorded new record highs in May. Even the price of oil is flirting with $70 a barrel, and this despite the fact that renewables cost less than fossil fuels and the politics of the moment have never been more hostile to the hydrocarbon-based global economy. But perhaps nowhere demonstrates the sudden mania for commodities as the U.S. lumber market, which has gone positively parabolic.

As you can see on the chart above, the U.S. lumber market’s response to the global pandemic was the same as everyone else’s: fear and panic. But that fear lasted all of a month. Since April 2020, the price of lumber and wood products has skyrocketed. Only in recent weeks has the rally taken a breather, but even with the recent swoon, prices are still more than 5 times what they were in April 2020. Plus, there seems to be plenty of reason to expect they will stay that way. After all, the U.S. is going through a veritable renovation and building boom and 95 percent of homebuilders say they can’t get their hands on the lumber materials they need to match demand. Demand exceeds supply, so prices should continue to go up. Right?

Maybe not. Look at this: 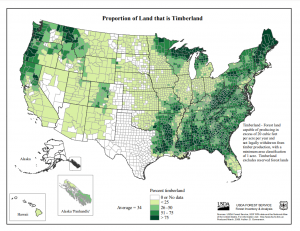 You’re looking at a USDA Forest Service Map from 2007 showing the proportion of land that is timberland. Look at all of the green on that map. There is indeed a shortage of lumber products in the U.S. – but there isn’t a shortage of wood at all. Quite the opposite: there is such a surplus of wood in the U.S. that it is ruining the lives of farmers and investors who decided to put their savings, not into the stock market, but into cold hard wood.

Here are some numbers to communicate the same point:

Common sense tells you that the people making the most money out of the ascension of lumber product prices would be the investors with the forethought to plant the trees and harvest the wood in the first place. But that isn’t what has happened at all. Quite the opposite. Timber farmers in the American South have been facing low prices ever since the bottom fell out of the market in the lead up to the 2008 financial crisis. If you adjust for inflation, the price of Southern pine was already down about 45% from 2007 – and hasn’t picked up much despite the building boom, the commodity supercycle, and the shortages of lumber products throughout the U.S.

Here’s an eyepopping summation from The Wall Street Journal in a February 24th article on the subject:

“The surplus of standing pine is such that growers, foresters and mill executives expect that even with mills sawing at capacity and new facilities coming online, it could be another decade, maybe two, before enough trees are felled to balance supply with demand.”

In other words: no supercycle to see here! Quite the opposite. For the poor saps holding onto (and paying taxes on) timberland, it is going to take a decade until there is sufficient demand to meet supply. As it turns out, there is not a shortage of the actual commodity – in this case wood, especially southern yellow pine – needed to make lumber products. The issue is a dearth of sawmills. There isn’t enough spare mill capacity to transform all of that wood into lumber products.

Not only that, but North American sawmills don’t really want to expand. The invisible hand is supposed to teach us that when prices go up, production rises to meet it. In this case, however, prices have gone up too much – so much that even the beneficiaries think it’s a bubble. Sawmilling companies are afraid of what happens when prices eventually go down – especially considering the huge surplus of wood present in the market. As a result, these companies aren’t pouring their windfall into new operations but into things like special dividends for their shareholders. According to the U.S. Federal Reserve capacity utilization for manufacturing wood products was 78.8 percent in April – up just 6 percent compared to Q3 2020 despite a 57 percent increase in softwood lumber products.

What macro lessons can we take from this micro perspective?

First of all: Don’t pay much attention to all this commodity supercycle talk. That’s just an easy headline. Each and every commodity is part of its own ecosystem. Some commodities, like copper, may well be entering a prolonged era of ascending prices. Some others, like southern yellow pine, are a mirage. Investing in commodities means doing a lot of nitty gritty research to you know how to capitalize (in the example above, investing in sawmill companies, not in the underlying commodity itself).

Second: Markets are fickle. They are driven by human psychology and by quantitative patterns. You must understand both to succeed. Economics is a fun discipline, full of interesting theories that make for great reading and even better university classes. Sometimes they even manage to predict markets correctly! Most of the time, however, markets don’t behave the way theory expects. Understand the human forces driving the market – and then use data and numbers to help seize on opportunities and to fend off risk.

Last but not least: Beware the herd. Identifying a market top or bottom is a tricky business, but when the entire herd is euphorically expecting prices to keep going up, it is usually a sign the top is nearby. This time last year, no one was predicting a surge in lumber and other commodities’ prices. What’s going to happen next – what’s the thing everyone will think you are crazy for thinking today but which they’ll be repeating 8 months from now as if they thought of the idea themselves?  These are the questions to focus on.

Years ago, the brilliant economist Albert O. Hirschman wrote in The Passions and the Interests, “It is better that a man should tyrannize over his bank balance than over his fellow-citizens.” During these unprecedented times, citizens are moving their money from the balance sheets of banks to decentralized finance (DeFi) computer applications. Dan Morehead of Pantera Capital explained the radical transformation: “In DeFi, you’re using code to escrow or custody the funds, and borrowers are getting much lower rates to borrow at, and lenders or depositors are getting a much higher rate.” When the excitement is expunged, one major problem persists: the code used in DeFi resides in a grey area beyond the scope of banks and governments. The actions of retail investors and DeFi creators may have been harmless but bad actors in the crypto space have raised eyebrows and evaded legal prosecution. Gary Gensler, the Chairman of the SEC, has seen the forest for the trees: markets work best when there’s a cop on the beat. As the newly confirmed cop on the beat, Gensler is going to write a speeding ticket for decentralized finance(DeFi): “DeFi platforms raise a number of challenges for investors and the SEC staff trying to protect them.” While crypto evangelists and entrepreneurs might view DeFi as one of the most innovative financial developments after the ATM, the SEC, rightly so, sees several bad actors deceiving hard-working Americans. In fact, Gensler’s focus is in sync with the Chinese. They “have ordered sweeping investigations into the shadow banking sector” and Bitcoin miners are leaving China. Every innovation teaches hard-fought lessons. The state will implement the most rewarding elements. The former People’s Bank of China director Yao Qian said, “China’s digital yuan will utilize smart contracts and will be built to counter Alipay-like payment platforms designed by the privately-owned conglomerates.” The Chinese need to demonstrate perfect competence with their affairs; “To get rich is glorious.” Glory is made up of notable achievements. DeFi is here to stay but its form will change. During a talk at Google, Henry Kissinger stated the Chinese view: “The Chinese think, as a general rule, that they will influence other societies by the majesty of their performance, by the magnitude of their efforts, and that they will then draw them into a pattern of relationships.” Their performance and relationships with countries undergoing financial transformation will set new standards. The control citizens have over their bank accounts may turn into calibrations engineered by the state. 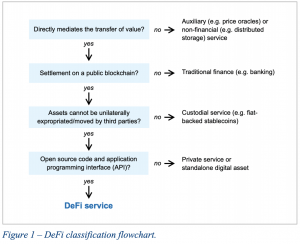