LET DEMOGRAPHICS FRAME YOUR PERSPECTIVES – BUT NOT DEFINE THEM.

In this week’s edition Jacob Shapiro, our Senior Macro Researcher, explores the dynamics of demographics and their potential use as a means for understanding the path ahead for economies.

When looking to understand the world around us, geography and demographics are two of the more enduring inputs to consider. They provide the constraints and form the basis of the long- term trends for nations and regions. They are the fundamental inputs in the economic machine.

With demographics, as with most things, one has to dig below the surface and really explore the complex dynamics at play. The importance of demographics is undeniable – indeed, many well-respected thinkers have argued that a nation’s demographics are synonymous with its destiny. The truth however is more varied.

Consider Germany’s demographics in the late 1920s and the early 1930s. They look awful, reflecting the twin problems of the loss of entire generation fighting in the trenches during World War I and a declining birth rate. In 1926, the national statistics office, the Statistisches Reichsamt, published its first study on the German fertility problem, and one of the first major political issues for the National Socialist Party Germany’s lack of fertility. It is pretty remarkable, then, that less than a decade later, Germany’s economy boomed, and the Third Reich almost succeeded at conquering all of Europe. 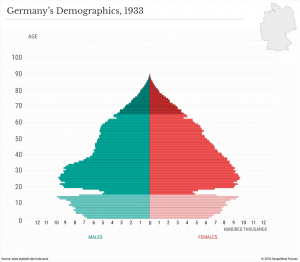 Still, by and large, demographics – when wielded carefully – can yield tremendous macro insights. With appropriate humility and more than a grain of salt, let’s consider two maps. Consider that over the next four years, much of the world will be growing at less than replacement level, and some major developed economies (like Japan) are already shrinking. Growth prospects, meanwhile, are confined to Central Asia, the Middle East, and sub-Saharan Africa. 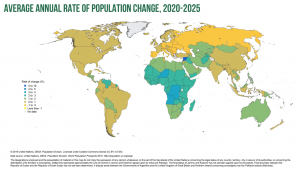 The last time with had a multipolar geopolitical era were the decades before World War I. Not coincidentally, that was also the age of imperialism, as colonial powers sought far-away colonies for their raw materials to supercharge their economies. The logic of imperialism is coming back, as is a new era of resource nationalism (just look at what happened in Peru’s elections this month) ­– but this time, it comes with a twist. Developed economies don’t just need raw materials – they also need markets to sell to. And the markets that are growing are the greenish-blue ones on the map above.

Now let’s dare to zoom out even further and look at what the UN projects population change will look like over the course of the next three decades. 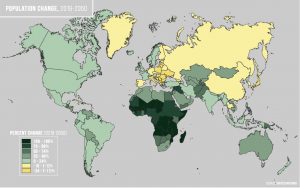 Eastern Europe, Russia, China, Japan – all shrinking. Sub-Saharan Africa? Positively booming. And modest increases in total population for regions like Latin America, North America, and South Asia, which will presumably be facing the sorts of aging demographics countries like China are facing today.

Keep in mind, however: this is just one variable. Growth doesn’t necessarily mean wealth or power. Sub-Saharan Africa is also one of the regions of the world most likely to be negatively impacted by climate change and water scarcity. The continent’s weak political institutions and unresolved conflicts are further arrestors to growth. Just because a demographic picture looks good doesn’t mean a market is primed for take-off – and just because a demographic picture looks bleak doesn’t mean a market is doomed to collapse.

One should also note that with demographics, especially in developed economies, one has to consider the qualitative as well as the quantitative inputs. Having a well-educated and healthy population is perhaps a better foundation for an economy and a society than simply having large numbers of young people.

The lesson is simple: Do the work and let demographics frame your perspectives – but not define them.

Can Mexico strike white gold? – A look at the potential for lithium mining in Mexico:

An overview of the state of crypto regulation: https://coinshares.com/insights/crypto-regulation-june-2021

Jacob Shapiro, Global Macro Adviser
Jacob is a geopolitical analyst with over 10 years of experience providing clients with the context, foresight, and extensive analysis they need to solve for the unknown and enhance their understanding of global and regional affairs. He is the founder and chief strategist of Perch Perspectives, a human-centric business and political consulting firm that applies geopolitical expertise to business strategy for Fortune 500 companies and governments. Formerly, he was the director of analysis at Geopolitical Futures and a Middle East analyst at the global intelligence firm Stratfor. A loyal student of history and geography, Jacob wields both in order to empower his clients to make accurate, informed decisions and gain a more holistic view of the events and issues that impact them. Jacob always maintains a distinctly global focus in his work, but he also has extensive experience tackling problems in supply chain, agriculture, technology, and energy markets. He is available for conversations with clients and interested parties on global macro trends and how they can best deploy the Strategic Funds’ sets of strategies to protect and optimize their broader investment portfolios and navigate the ever-changing global landscape.
Drowning in Information, but Thirsty for Insight?
Join our Strategic Insights Community! We do not have all of the answers, but we are not afraid of exploring the big questions and discussing the matters that affect you and your family as you work to achieve your goals.