Nickel For Your Thoughts

Nickel and the various compounds derived from it are essential to modern manufacturing practices. Among nickel’s extensive virtues are its high melting point, its natural resistance to corruption, and the ease with which it can be combined with other elements to perform alloys. Nickel is also a versatile metal due to its ductility: a fancy word which simply means that nickel can be reshaped without breaking or weakening the metal itself. Of nickel’s various uses, its importance in the production of stainless steel accounts for more than 70 percent of primary nickel consumption annually. 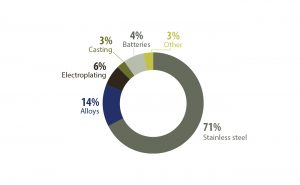 Nickel prices have doubled in the last four years not because of a sudden massive increase in the production of stainless steel globally. Nickel, like some of the other critical mineral commodities featured in this series, is set to play a crucial role in the emergence of clean energy technologies due to its importance in lithium-ion batteries. In the above chart from 2019, batteries accounted for just 4 percent of global nickel consumption, but a 2021 IEA report found that figure had increased to 7 percent in less than 2 years. According to IEA estimates, clean energy technologies’ demand for nickel will grow between 30 and 60 percent in the next two decades.

The good news is that there is a lot of nickel out there in the world, and relative to other critical minerals, nickel is highly recyclable. The bad news is that nickel production and refinement is dominated by a relatively small number of players globally, and there is little prospect of diversification of supply sources in the short-term future. Indonesia and the Philippines account for almost half of global output, and Indonesia itself accounts for more than half of projected production growth in the next four years. Indonesia’s stranglehold on global nickel markets is not quite as tenacious as the Democratic Republic of Congo’s hold over cobalt – but it’s not far off.

Relative to the DRC, however, Indonesia is a far more effective and capable geopolitical force. Historically, China (and, to a lesser extent, Japan) dominated the processing of nickel ore from Indonesia. But since 2009, when Indonesia passed a Mining Law that required companies to process ore locally before shipping it abroad, Indonesia has followed through on its plans to become a nickel superpower. Indonesia banned export of nickel ore in 2014, and with the exception of a brief reprieve between 2017-2019, the Indonesian government has stuck to its guns.  Last year, according to Chinese customs data, nickel ore imports from Indonesia declined by 86 percent compared to 2019. It is not a coincidence that the spot price for nickel has doubled since 2017.

In other words: as Indonesia goes, so too will nickel prices. Which means any investor contemplating anything from nickel futures to the future of electric cars needs to become an expert in Indonesia’s geopolitics. Welcome to a brave new geopolitical world, where “geopolitics” won’t just be a throw-away line that mainstream financial media publications use as a filler-word for deep structural changes that are reshaping the world around us. But let’s not go too far down the rabbit hole, that is a Strategic Perspective for another time.

Complicating matters is that not all nickel is created equal. Nickel products can be divided into two basic categories: high-purity class 1 products (with nickel purity at 99.8 percent and above) and lower-purity class 2 products (which contain nickel that is less than 99.8 percent pure). The former is generally sourced from sulfide deposits, while the latter is sourced from laterite deposits. Indonesia – as well as the Philippines and New Caledonia – are blessed with laterite resources. Indonesia is hoping to use a technique called high-pressure acid leaching (HPAL) to produce class 1 nickel from laterite deposits. Hope is a good thing – maybe the best of things – but this isn’t the Shawshank Redemption. HPAL is costly, environmentally destructive, and ultimately, unproven. 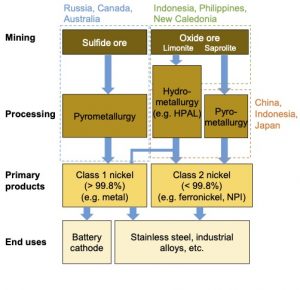 As you can see from the chart above, Russia, Canada, and Australia are the primary sources of sulfide ore, which is where most of the nickel for battery cathodes is produced. Advances in mining and processing technology could conceivably change the picture above considerably, which means becoming an expert in Indonesian geopolitics isn’t sufficient – an investor must also learn a thing or two about cutting-edge nickel mining technology to get a sense of whether there will be a sudden glut of nickel on the market in the next 5-10 years – or whether there could be a major shortfall of nickel in the years ahead.

And that is not the only uncertainty to keep in mind. The most efficient and energy dense lithium-ion battery in use right now is a nickel-manganese-cobalt battery. The supply chain for all three of those critical minerals is incredibly risky, as global supply and production is concentrated in a very small number of countries. It is no wonder, then, that Chinese electric vehicle manufacturers have been betting instead on lithium-iron-phosphate batteries. Though less efficient, these batteries are cheaper to produce, and while the supply chain for LPF batteries isn’t exactly risk-proof, it is much more predictable than the increasingly competitive supply chain for NMC batteries. Even Elon has been talking up the potential of LPF batteries in recent weeks.

Being invested in commodities in a smart and flexible format is a powerful way to take advantage of some of the macro trends reshaping the world (climate change, geopolitical competition, inflation/currency debasement, and emerging technologies…to name just a few). This, however, isn’t an approach for the faint of heart. As the example of nickel shows, it is rarely as simple as identifying a commodity that everyone will use and that will therefore increase in price.

The hard part is putting together the macro picture, i.e., building a model of how the various external forces constraining markets are will intersect, while maintaining the flexibility to pivot if, for instance, a U.S.-China conflict blocks supply chains in South China Sea, or technological advances change the economics of nickel mining and processing, or the Indonesian government’s penchant for enforcing reforms is challenged by domestic unrest, or New Caledonia finally declares independence. It is at the intersection between these sorts of macro forces and micro insights where true alpha usually resides. It is that intersection that our Strategic Perspective Series is focused upon.