The Cotton is High – Literally

The combination of geopolitical intrigue in Russia and Ukraine, the U.S. Federal Reserve turning hawkish, and global energy prices surging, it is easy to lose track of stories that would otherwise have been top of the fold. Case in point: unless you’re in the apparel industry or are a farmer, or else are just a commodities nerd like us, you probably didn’t know that cotton futures surged to their highest in 10 years last month. The last time cotton prices were this high was 2011 – when futures breached a previously unthinkable $2 a pound. That is the highest cotton prices have ever gone on record – even above the price that cotton reached during the American Civil War. But just because cotton isn’t setting records doesn’t make its sudden and unexpected price surge unremarkable. After all, it’s already 70 percent of the way there. 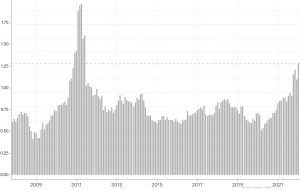 The problem in 2011 was a combination of several factors. A surge in demand post-global financial crisis took markets off guard. (Markets often underestimate the speed at which economies can snap back into place after a crisis.) Significantly increased demand from China, along with floods in key producing states like Pakistan, and your normal garden variety trade speculation, all conspired to send cotton prices upward. As a result, global demand for cotton – which had traded between 40 and 80 cents for a decade – threatened to outstrip production in 2011 by over 1 million bales.

As in 2011, the current surge in cotton prices owes to a variety of factors, but that is where the similarities end. According to both data and anecdotal observations collected from farmers, the issue right now isn’t so much that there is not enough cotton to satisfy demand. After all, Australia is forecasting its second-largest cotton crop in history at 5.2 million bales – almost double the previous year. China and Pakistan are also seeing larger crops than expected. According to the USDA, accumulated exports plus outstanding sales are in line with historical norms. Instead, the primary issue is that cotton is not getting from the field to where it needs to go.

According to the USDA, accumulated exports are at their second-lowest level in recorded history for this time of time of year. In the organization’s own words: “large outstanding sales are offsetting low physical shipments.” Lags in harvesting and processing, port congestion, and logistical issues saw shipments through December 2021 down 45 percent from the previous season, with China down over 70 percent and Vietnam down by 50 percent. This is also not just an American problem. According to one Australian analyst, as much as 10 per cent of global cotton supply is currently caught up in logistical bottlenecks. At one point last month, the Omicron variant knocked out almost 10 percent of the workforce at the ports of Los Angeles and Long Beach, creating back logs of over 100 ships. Considering how bad things were before the Omicron variant asserted itself, the congestion has revealed significant risks to U.S. agricultural exports. 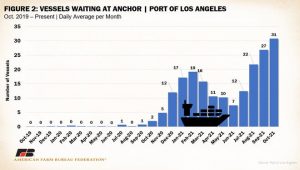 This is a particularly sticky problem for cotton. It is true that issues like higher input prices, drought, and a greater than expected resurgence of global economic activity is lifting prices. But the reason cotton is behaving like a meme-stock being gamma-squeezed is because it sort of is. For months, there has been a serious and worsening imbalance between on-call sales and on-call purchases by cotton mills. According to one export, the ratio of on-call sales to purchases just for May and July contracts is 9-1. In practical terms, that means almost 8 million bales of cotton must be bought via futures…and only 895,000 have to be sold. Cotton growers see this dynamic at play just as clearly as anyone else and are holding onto their cotton as they expect even better returns, like India’s farmers. These twin dynamics – cotton getting stuck in transit and on-call sales and purchased being so badly imbalanced – could push cotton prices above $1.50 and even beyond. Eventually, prices will crash back down to earth, of course, but right now, the market is in a “no man’s land.” 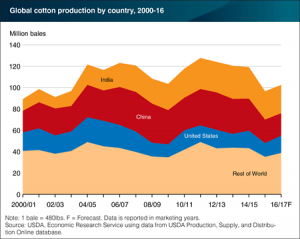 To add insult to injury, however, the U.S. is lagging on its share of cotton production. And since the U.S. is one of the most important cotton producers in the world, when the U.S. lags, it affects the entire market, even if countries like Australia and Pakistan are enjoying bumper years. The U.S. is facing the same problem as much of South America – a double-dip La Nina, leading to cooler and dryer conditions. Here is the latest U.S. Drought Monitor from the University of Nebraska-Lincoln. 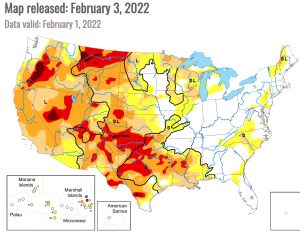 And here is a map of where cotton is grown in the U.S. 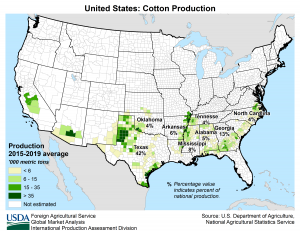 Texas and Oklahoma – together responsible for ~46 percent of U.S. cotton production – are facing severe drought. Indeed, the moment when the USDA revised overall U.S. cotton production down by 660,000 bales to 17.6 million bales was when cotton prices took off in earnest. The combination of a decline in production, lower exports, and logistical issues offset increases in other cotton markets, lifting prices to their current levels and encouraging the kind of speculation that accompanies markets where opportunities suddenly present themselves.

The cotton story is one that clearly shows both the risk and upside of investing in commodities. An agricultural commodity like cotton can remain range-bound for a decade, and then a unique set of circumstances can make the whole market go haywire for a brief time before settling back down. Watching developments closely and maintaining situational awareness is key to capturing opportunities – as is retaining enough creative imagination to realize when patterns and routine are shifting and knowing how to hedge so that one wrong move doesn’t complete wipe you out. The cotton story will play out and prices will eventually deflate, but fortune favors the brave, and the brave are already wondering, “What’s the next cotton?”