For most of the year, uranium prices have trudged along unremarkably. Then, in August, uranium prices went “to the moon”. In the span of a month, the uranium spot price surged 70 percent. Prices have since come back down to earth, but as of this writing, are still over 30 percent above their price on August 16th. That is still far below previous spikes in 2008 and 2011, but overall uranium seems to have broken its downward trend. 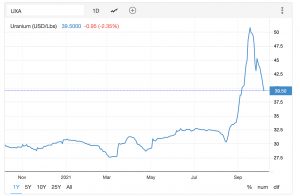 As it turns out, uranium mine production is predicted to cover only 74 percent of world nuclear reactor requirements this year, and the market deficit is expected to continue through the end of next year. One Bank of America analyst raised its uranium price forecast up 41 percent right as prices were peaking. Throw in a relatively spartan number of countries responsible for exporting uranium ore, and this relatively common metal seems to share plenty of similarities with other commodities covered in this series: increased demand, not enough supply, and a brittle supply chain.

In this case, however, it turns out that uranium really isn’t the story here. It is just one small facet of a much larger story about nuclear power. Wind and solar and batteries get the lion’s share of attention when the future of global energy markets get discussed, but in the here and now, nuclear power and hydropower provide more than 75 percent of the world’s low-carbon generation. Nuclear power by itself provides roughly 10 percent of global electricity supply, a figure that is even hire for developed countries (around 18 percent).

That figure, however, has been steadily shrinking in recent years. The decline began in 1979, when the Three Mile Island accident in Pennsylvania occurred. Just a few years later, in 1986, the Chernobyl disaster in the Soviet Union further underscored the apparent risk posed by nuclear power. The byproduct of that fear was that the U.S. and the Soviet Union got a lot more skittish about nuclear power. Just when global attitudes about nuclear power might have softened came the Fukushima Daiichi nuclear disaster in 2011. In other words, just as climate change was becoming increasingly more impactful, the fear of a nuclear accident was causing developed economies to eschew nuclear power.

Case in point: just look at this Visual Capitalist graphic showing the geography of uranium production for the past 70 years. Until 1980, the USSR and the U.S. were the top producers of uranium in the world. That reality abruptly changed, as places like Kazakhstan, Niger, Namibia, Canada, and Australia are now at the top of the list. 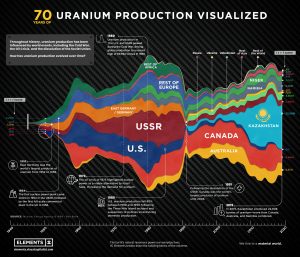 It wasn’t just uranium production, however, that was affected by fears concerning nuclear energy. The entire nuclear industry was neglected, especially in the United States, the European Union, and to a lesser extent, Japan. The average age of a nuclear power reactor in the United States is now 39 years old, and just a small fraction of reactors went online in the last 10 years. Most of the European Union’s nuclear power capacity is between 30-40 years old. Considering that the original design for most of these operations was 40 years and you begin to see a much bigger potential opportunity than the shortage of uranium, the commodity upon which most nuclear power capacity currently depends. 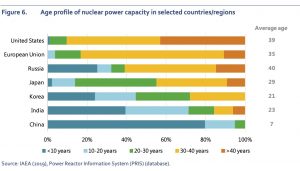 Note also that there is a definite “changing of the guard” when it comes to where nuclear power is being prioritized right now from a policy perspective. The 10 countries that get the largest share of their electricity from nuclear power are all European, led by France, Slovakia, and Hungary. But that won’t be the case for very much longer. According to the latest data from the IEA, there are 54 nuclear reactors currently under construction, and 40 of them are in a developing country, led by China (11), India (7), Russia (6), and the United Arab Emirates (4). 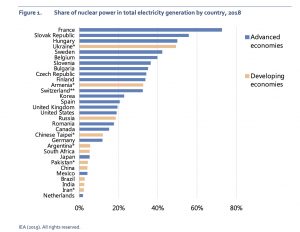 Furthermore, these developing countries – especially China – are not just copying the nuclear technology of the past. They are innovating. The nuclear physicists who discovered how to split the atom were searching for an inexhaustible power source, but it didn’t take long for the exigencies of geopolitics to intervene. (If you are looking for a good book on this subject, Richard Rhodes’ “The Making of the Atomic Bomb” is the gold-standard – and one of the best non-fiction books ever written, in this analyst’s opinion). Uranium became the nuclear fuel of choice because great powers didn’t just want inexhaustible power. They want to fashion weapons from the bounties of science.

There is, however, an alternative to uranium where it comes to power generation: thorium. Thorium is more abundant, it is safer to use, and the facilities necessary to use it can be much smaller, both in terms of physical size and power capacity. Furthermore, it can produce energy more cheaply, and it produces much less of the radioactive byproducts created by conventional nuclear reactors. And just last month, Nature wrote about how China hopes to use thorium – which is a waste-product of its rare-earth mining industry – in test trials as it attempts to become the first country in the world to commercialize thorium-fueled nuclear reactors.

Of course, success is not assured, and in any case, it will be years at least until thorium reactors can compete with more conventional reactors. In the meantime, however, nuclear power is primed for a resurgence. If the world is to meet its international climate goals, the IEA estimates that nuclear power generation needs to increase by 80 percent by 2040. As China and India revert back to coal, the dirtiest of the hydrocarbons, and as natural gas prices spike throughout the world, the need for nuclear is outweighing the fears once associated with it.

That makes uranium an interesting commodity for long-term focused macro investors, especially those able to augment their perspectives with highly skilled quantitative tools. There is new competition in the market, most notably closed-end funds buying and holding a significant amount of physical uranium (at least part of the reason prices spiked in the last two months).

But it also points to a much bigger opportunity, i.e., a significant growth in the global nuclear industry at large. Focus too much on uranium and not only will you miss the bigger picture, but you’ll get left behind when the more macro-investment related theme takes off in earnest. Nuclear-powered electricity production is forecast to increase 3 times more in the next 20 years than it did in the past 20. That’s the strategic perspective to keep in mind as uranium prices gyrate.