THE (R)EVOLUTION WILL BE DECENTRALIZED 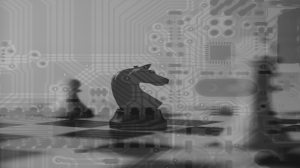 THE (R)EVOLUTION WILL BE DECENTRALIZED…

The global monetary & financial system is heading for a paradigm change. The next SWIFT system and financial market structures are being build all around us, from the grassroots up and with little regards for national borders and the analog reality that accompany them. The (R)evolution is afoot.

Buckminster Fuller – the savant architect and Renaissance man – stated that; “You never change things by fighting the existing reality. To change something, build a new model that makes the existing model obsolete.”

What has been largely considered as Millennial & Gen Z playthings are emerging as the building blocks for ‘a new model that will make the existing model obsolete’ in due time.  While Crypto and DeFi have largely been looked upon as speculative assets to people in developed markets, in emerging markets they are already forming the beginning of a new financial system.

According to a recent report from Findex; “Globally, about 1.7 billion adults remain unbanked. In 2014 that number was 2 billion. Virtually all unbanked adults live in developing economies. China and India, despite having relatively high account ownership, claim large shares of the global unbanked population because of their sheer size. Home to 225 million adults without an account, China has the world’s largest unbanked population, followed by India (190 million), Pakistan (100 million), and Indonesia (95 million).” 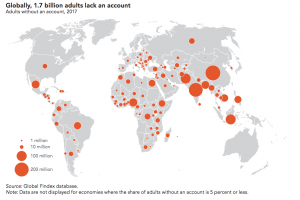 For billions of people this is the first time they can access a range of financial services and global assets. The initial wave of FinTech brought financial services onto the Smartphone, DeFi takes it to the next level. Innovation is being unleashed on a global scale, and much of it is driven from the ground up and it is decentralized. Collectively DeFi is the App that is making blockchain technology user friendly, it has the potential to be the bridge to a new paradigm.

There now is a DeFi equivalent for every traditional financial instrument and function.

These instruments are still at the very early development stage, it’s more ‘cow-bell’ than ‘grand piano’. Plenty of the individual projects will no doubt falter and drop quietly by the wayside, others will soar too close to the sun and come to a spectacular demise, but some will become the cornerstones of a new foundation for our financial & market systems. It is still early.

While the Coinbase IPO – a centralized stop-gap event – got a lot of attention, the (R)evolution will be Decentralized. The quarterly volumes on Decentralized Exchanges (DEX) has been building and has reached significant levels in a short space of time. Forget the silly names and memes, the innovation is real. The network effect is underway. 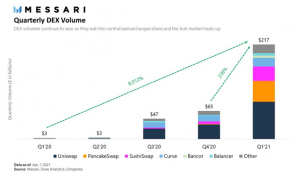 The same dynamics are at play in the lending space. Mighty oaks grow from tiny acorns. 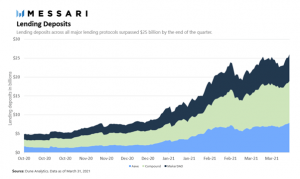 Investors should avert their gaze from the ‘noisy’ spectacle of the developed markets speculative frenzy and look at the shifting sands of the larger and more consequential evolution underway. A better system has been forming – much of which is being developed and adopted rapidly by the leapfrogging populations of emerging markets as well as the younger generations in developed markets. These groups are the future. Chasing prices or building value? The choice is yours. Investors should be finding smart ways to position themselves in this dynamic space.

This piece (Strategic Thoughts) does not constitute an offer to sell, solicit, or recommend any security or other product or service by Strategic Capital Advisors or any other third party regardless of whether such security, product or service is referenced. Furthermore, nothing in this piece is intended to provide tax, legal, or investment advice nor should it be construed as a recommendation to buy, sell, or hold any investment or security or to engage in any investment strategy or transaction.

THE (R)EVOLUTION WILL BE DECENTRALIZED2021-04-262021-04-27https://www.thestrategicfunds.com.pr/wp-content/uploads/2021/02/web_logo_white.pngThe Strategic Fundshttps://www.thestrategicfunds.com.pr/wp-content/uploads/2021/04/website-st1.png200px200px
About
Sune Hojgaard Sorensen, Managing Director
Sune brings 20 years of business and professional investment experiences across asset classes, investor segments and geographical locations to his work with Strategic Funds. Sune is the founder of an independent macro research company that provides distinct insights on global trends and related investment risks and opportunities. He is a partner with a US based think tank focused on research and advise for leaders in both the public and private sectors. He sits on the advisory board of a Swiss wealth and asset management group. He develops and manages investments for global families and entrepreneurs in his role as an Independent Asset Manager (IAM) with a Swiss based asset management business. He has developed a deep global bench of contacts across industries, and across his various business interests he can draw on a unique set of skillsets that enables him to provide actionable investment insights for optimal risk/return balancing. He provides The Strategic Funds group with perspectives on macro trends for the identification of risks and opportunities. He is available for conversations with clients and interested parties on global macro trends and how they can best deploy the Strategic Funds’ sets of strategies to protect and optimize their broader investment portfolios and navigate the ever-changing global landscape.
Drowning in Information, but Thirsty for Insight?
Join our Strategic Insights Community! We do not have all of the answers, but we are not afraid of exploring the big questions and discussing the matters that affect you and your family as you work to achieve your goals.