In this week’s edition Sune Hojgaard Sorensen, our Director of Macro Research, takes a look at the so-called “Covid-19 bankruptcy gap” and explores if it’s a calm before the storm phenomenon or something more lasting.

According to a BofA Global Research report from Dec 2020 US corporations owed a record $10.5 trillion to creditors, either in the form of bonds or loans, a stunning 30-fold increase from a half-century ago.

Unprecedented monetary and fiscal measures by central banks and governments has been the key to suppressing bankruptcies. The questions remain for an even more leveraged economy – Was this like oil on troubled waters, just a temporary reprieve? 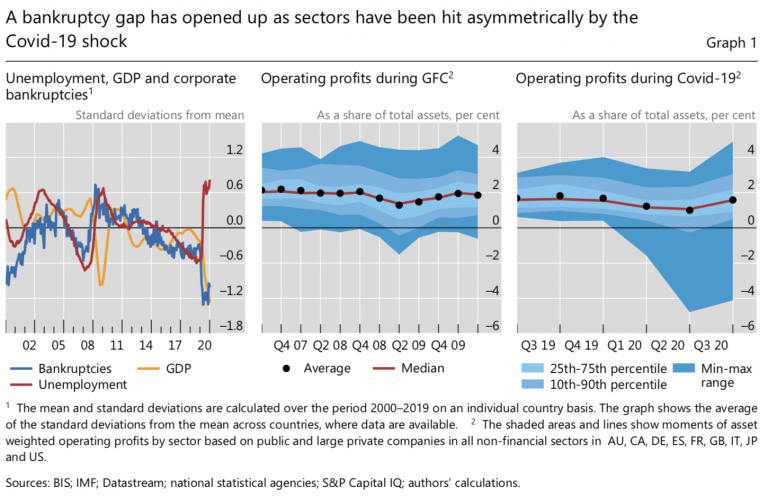 A recent BIS report titled; “Liquidity to solvency: transition cancelled or postponed?” states; “Since the start of the Covid-19 pandemic, a “bankruptcy gap” has emerged between measures of expected and realised bankruptcies globally. The ample supply of credit to make up for short-term losses has been an important factor decoupling bankruptcies from the sharp reduction in firms’ cash flows. Firms’ reliance on credit suggests that it may be too early to dismiss future solvency risk. Significant increases in leverage and weak earnings forecasts in some sectors suggest that for some firms, greater credit extension may have only postponed, rather than cancelled, their insolvency.” 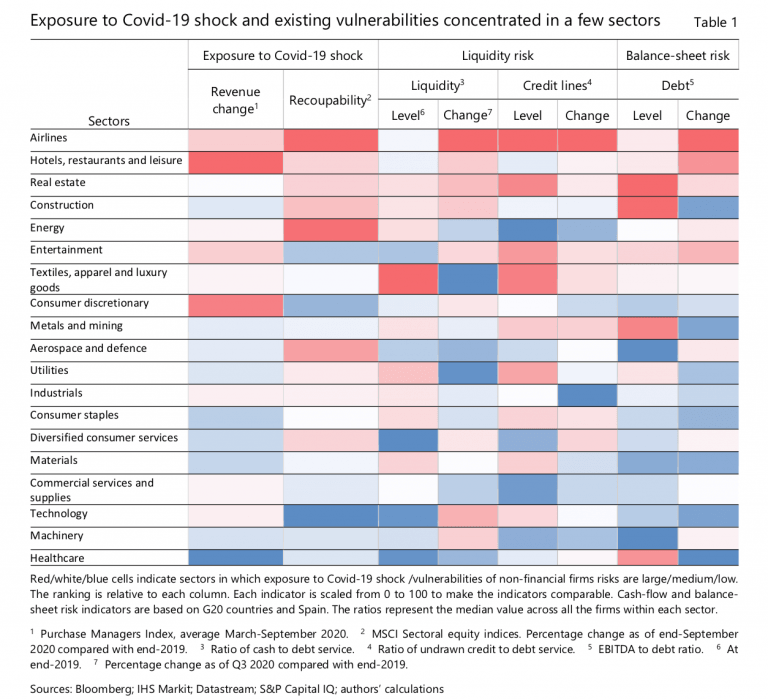 They go on to highlight that; “…an important factor suppressing bankruptcies has been the ample supply of credit, facilitated by unprecedented monetary and fiscal support. This has been pivotal in preventing insolvencies, because it is ultimately insufficient cash flows that give rise to bankruptcies. After all, firms go bust when they cannot pay their bills. Ample credit during 2020 stands in sharp contrast to the Great Financial Crisis (GFC) when credit conditions were exceptionally tight.”

Concerns over the “Zombification” of the corporate sector predates the Covdid-19 crisis and we wrote about these dynamics in our Strategic Thought No 1 titled “Swimming with Zombies and Fallen Angels” – Read it here: https://www.thestrategicfunds.com.pr/a-journey-below-the-surface-swimming-with-zombies-fallen-angels/ –  The BIS report dives into these murky waters and comes up with the following conclusions:

“Whilst the increase in credit has prevented business firms’ insolvency in the short term, it has also increased their indebtedness. In an optimistic scenario, with the global vaccine roll-out being successful, business models of the vast majority of firms in the hardest hit sectors will continue to be fundamentally sound and cash flows will recover to pre-Covid-19 levels. The risk of a significant rise in “zombification” will be low under this scenario. However, firms’ indebtedness will be higher, and this might result in changes of firm ownership from equity holders to creditors.

Perhaps the more worrying scenario is the combination of higher debt levels and depressed earnings for credit dependent firms in some sectors, as suggested by consensus forecast estimates for 2021. Under this scenario, firms in the airline, hotels, restaurants and leisure sectors would remain highly dependent on additional support to avoid insolvency. These risks could be compounded if vaccines are less successful in containing the spread of Covid-19. Prolonged weakness in these sectors could in turn spill over into the more leveraged commercial real-estate sector.

The uncertain outlook for firms’ cash flow and the role of credit in containing bankruptcies to date shines a spotlight on banks’ loss-absorbing buffers and provisioning strategies, as well as on accommodative financial conditions and government guarantees that have sustained credit to struggling firms.”

“The extension of credit to loss-making firms has clearly helped prevent the initial liquidity crunch from quickly morphing into widespread solvency problems. However, it remains uncertain whether this transition has been cancelled or postponed. Ample credit has resulted in sharp increases in firm indebtedness over the past year (Graph 3, left-hand panel). For example, in the airline and hotel, restaurant and leisure sectors, the median leverage in loss-making firms has increased by nearly 20 and 15 percentage points respectively. Going forward, the path of future cash flows will be a key factor in determining whether higher debt ultimately makes firms vulnerable to insolvency.” 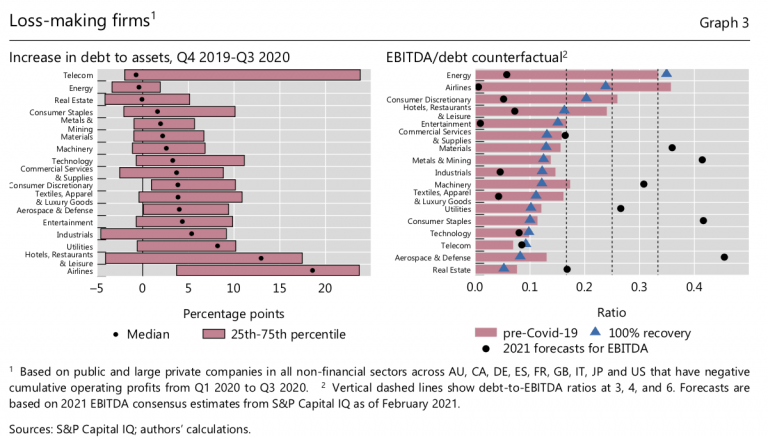 “Higher leverage, the uncertain outlook for cash flows and the role of credit in suppressing bankruptcies to date all shine a spotlight on banking sector buffers. As the economic outlook improved in the second half of 2020, banks reduced their quarterly provisions, and some even took negative provisions. That said, these reductions remained substantially smaller than the amount of loan loss reserves added during the previous three quarters. The spotlight also falls on financial conditions, which affects a firm’s ability to refinance higher debt loads, and government loan guarantees. Businesses that can succeed may need help as they undergo debt restructuring and repair their balance sheets. More broadly, policymakers must encourage and enable businesses in the most severely damaged sectors to reallocate their resources toward those sectors that are more likely to thrive in the post-pandemic economy.”

At this moment in time there is a feeling of calm before the storm as global corporate credit markets bask in the sun of improving sentiments and plentiful liquidity. Global governments and central banks have provided the largest “bridge loan” in history, the question remains will it be a bridge to nowhere or will it find firm footing in the ‘sunlit uplands’ just over the horizon?  Investors should seek all-weather solutions.

This week our Crypto Market Analyst, Toa Lohe, runs through some key trends currently unfolding across the crypto sphere.

Bitcoins and non-fungible tokens have grabbed headlines but President Biden’s nominee for the S.E.C., Gary Gensler,  is the real headliner. If confirmed, he will be the regulatory architect for the digital assets industry in the US. His nomination hearing in early March was well-received. SEC Commissioner Hester Peirce believes Gensler’s guidance will improve the regulatory framework for the digital asset space.

Central banks continue to experiment with digital currencies and promote the value of central bank digital currencies (CBDCs). Howard Lee, the Deputy Chief Executive of the Hong Kong Monetary Authority (HKMA), said recently, “In the digital age, central banks will have to become innovators and commit ourselves to digital transformation for the benefit of our economies.” In 2020, the HKMA and the Bank of Thailand (BOT) developed a distributed ledger technology-based cross-border corridor network. The success of that project has spurred a new project. At the moment, the HKMA is working with the BOT, the Central Bank of the United Arab Emirates, and the Digital Currency Institute of the People’s Bank of China on a wholesale CBDC project called Multiple CBDC Bridge. Not long ago, the Digital Currency Research Institute declared, “a completely anonymous central bank digital currency is not feasible.” In the coming years, stablecoins produced by private companies will clash with digital currencies built by central banks.

The Federal Reserve has remained mostly mute on the subject of a digital dollar. Federal Reserve Chairman Jerome Powell said, “To move forward on [a digital dollar], we would need buy-in from Congress, from the administration, from broad elements of the public, and we haven’t really begun the job of that public engagement. So you can expect us to move with great care and transparency with regard to developing a central bank digital currency.” The Fed’s inaction might trigger unhappy feedback from Americans in the digital asset space who hoped for their country to lead the industry but inaction or wu-wei is the best policy at the moment. Carl von Clausewitz once wrote about the two basic principles underlying all strategic planning: 1. Act with the utmost concentration, and 2. Act with the utmost speed. If US financial regulators adhere to those two principles after Gensler is confirmed, then the US dollar’s dominance will not be questioned if they don’t the diffusion will be fast tracked.

In the coming months, layers upon layers of financial regulation will be reexamined. The Financial Action Task Force released a public consultation for its updated “Draft Guidance on a Risk-Based Approach to Virtual Assets and Virtual Asset Service Providers.” Ciphertrace published a good summary of the draft. It’s obvious that the virtual currencies industry is in the midst of a transition from “Move fast and break things” to “Move fast with stable infrastructure.” 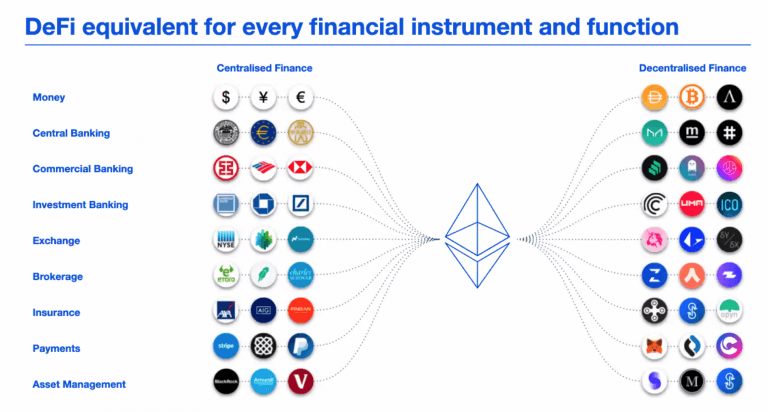 Check out the BIS report referenced in our ‘Macro Trends’ section here:
https://www.bis.org/publ/bisbull40.pdf

Some thoughts on the digital transformation for businesses:
https://hbr.org/2021/03/digitizing-isnt-the-same-as-digital-transformation?utm_source=dlvr.it&utm_medium=twitter&utm_campaign=Feed%3A+harvardbusiness+%28HBR.org%29

What to expect from Xi going forward:
https://macropolo.org/xi-may-ccp-core-will-govern-enduring-core-ideas/?rp=m