In this week’s edition Sune Hojgaard Sorensen, our Co-Managing Director, takes a look at the Chinese stock markets in a global context and asks if there is room to grow?

China’s economy is a giant in Asia and globally. According to the IMF China will account for 20.4% of World economic growth between 2021-2026. However, its stock markets are still relatively small compared with developed market ones. Is there an opportunity in plain sight?

Some background – China’s first stock exchange opened in the 1860s in Shanghai. It closed for 41 years during the Communist revolution. The Main Boards were opened again in Shanghai and Shenzhen in 1991 under the leadership of Deng Xiaoping as a platform for SOE privatization and reform. The SME and ChiNext Boards were opened in Shenzhen in 2004 and 2009 with more relaxed listing standards to accommodate SMEs, and even smaller entrepreneurial firms, with much less state ownership and control. The mutual fund industry got started in 1998 but is still small, despite regulatory efforts to promote its growth. Equity and hybrid mutual funds still hold less than 10% of the tradable portion of China’s stock market. The China Securities Regulatory Commission (CSRC) consistently reports that individual investors account for 80% of total trading volume or more leading to a volatile experience, however this has begun to change with a mix of domestic and international institutions taking a growing share of the market. Historically China’s stock markets have largely been a side experiment in a financial system that is dominated by a gigantic banking sector, which has generally financed centrally planned investments and until recently it was mainly supplemented by alternative financing channels such as the so-called ‘wealth management products.’

However as the CCP has gotten serious about cleaning up the financial system (even if it has been a case of 2 steps forward and 1 back) and establishing the plumbing for a functioning high value economy, they have increasingly moved beyond the rhetorical and instigated real changes with both the bond markets and the stock markets. Additionally, the establishment of various venture and private equity platforms have been brought to the forefront, in an effort to implement best practices for the operation of capital markets as a means to finance the real economy, and increasingly moving from bank debt to equity. With markets – that have been more known for the ‘heavy hand of government’ than the ‘invisible hand of free markets’ and still with relationship based decision making and cross ownership, mad margin arrangements and the before mentioned unsophisticated hordes of retail investors at the steering wheel not to mention the closed capital account – there is still a long way to go, but progress is notable and change is underway.

As China increasingly sees it as prudent to decouple from the traditional US led capital markets infrastructure and/or is pushed out, China’s own exchanges will be set to play an important and increasing role for the financing of Chinese companies and overseas investors will have to participate if they wish to harness the growth potential. Furthermore these exchanges, as they grow, could also be set to play a larger role in the capital raising efforts of Asian, Eurasian, African and other international companies that wish to access Chinese capital and by doing so giving China’s financial sector a boost. As with the bond markets, opening up further comes with plenty of risks for the CCP but in order to achieve their larger goals of ‘self-reliance’ it is a price they must pay.

On a relative basis China’s stock markets still have far to go in order to reach a level consummate with the size of its economy. There are constraints, plenty of risks but also opportunity for investors who can filter the ‘noise’ and who are willing to go beyond the indexes and do the work. 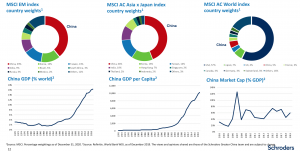 The continued interest in China’s A-share market is rising with inclusion into globally followed indices.

Beyond the still evolving infrastructure of the Chinese markets, the main risks to China-exposed assets (globally and China-domestic) are China’s high debt levels and the ongoing US-China conflict. Based on current valuations it would appear that discerning investors are compensated for these risks.

Our Crypto Market Analyst, Toa Lohe looks at the developments in the fast-moving Stablecoin space and he considers the potential implications of the signs that while the ‘noise’ is still there the US regulators are finally starting to move in more pragmatic ways.

An old Chinese proverb states, “It is easy to find a thousand soldiers, but hard to find a good general.” The cryptoassets landscape is filled with thousands of soldiers but very few good generals. That is changing. MIT’s Blockchain and Money professor, Gary Gensler, heads the SEC. His confirmation demonstrates signs of the US government’s revived active participation in the China-led global fintech revolution.

In fact, one new bill in Congress titled Eliminate Barriers to Innovation Act of 2021 supports the establishment of a digital asset working group uniting the SEC and the CFTC which Gensler led from 2009 to 2014. Even though US politicians and regulators are starting to investigate the construction of a digital dollar, stablecoins like the controversial stablecoin Tether have gained an enormous following and continue to attract new users. If American regulators want to catch up with the Chinese they should follow Professor Steven L. Schwarcz’s recommendation: “To facilitate stablecoin development, a government and a private-sector stablecoin issuer could partner by creating, for example, a special purpose vehicle (SPV) that issues the stablecoin pegged to the government’s fiat currency.”

One private company that could enter into a special purpose vehicle with the US government would be PayPal. Dan Schulman, PayPal’s CEO, said recently, “A digital dollar would be fully backed by the U.S. government, but done in a digital fashion, and that might allow the government to open up Fed funding to other institutions besides banks, potentially companies like PayPal, where you could fund straight from the Fed right into a digital wallet.” The future of global stablecoins lies with countries and companies willing to coordinate and cut the red tape for specific turning points in history. As more buyers and sellers enter the online marketplaces around the world, “the agora of the future,” will be designed by agile and lean market-focused state actors. 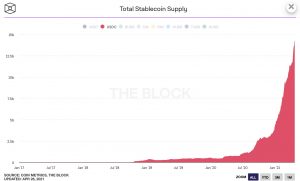 The GMO 7-year outlook for the different Asset Classes is grim: https://www.gmo.com/americas/research-library/gmo-7-year-asset-class-forecast-1q-2021/

Findex shares an overview of the World’s unbanked: https://globalfindex.worldbank.org/sites/globalfindex/files/chapters/2017%20Findex%20full%20report_chapter2.pd