In this week’s edition Sune Hojgaard Sorensen, our Director of Macro Research, takes a look at the position of the US Dollar in the world.

Change is not an event. It is a process. The process underway in global trade and payment currencies is the beginning of a quiet paradigm change. 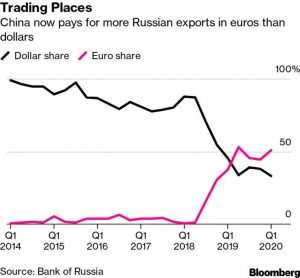 Pay me in USD, Bitcoin or the Euro?

While there has been much ‘noise’ about Bitcoin displacing the USD, it has in fact been the much-maligned Euro that has quietly taken center stage. In 2020 the Euro eclipsed the USD as the top global payment currency for the first time since 2013. 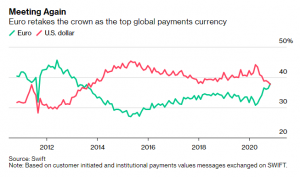 Be like water: Diluting the ‘Exorbitant Privilege’ one drip at the time…

China’s trade in goods has grown by more than a factor of nine since 2001, propelling the country to become the world’s single largest trader. The renminbi’s usage in forex trades expanded from effectively zero to 4.3% of all trades over the same period, but for now the renminbi remains the eighth most traded currency. 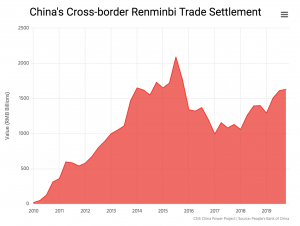 Other measures of currency internationalization reflect a similar trend. Foreign exchange reserves, which serve as stores of value in foreign currency, are a key indicator of currency internationalization. Of the roughly $11trln in allocated foreign exchange reserves held by countries around the world in 2019, just under 2% were denominated in renminbi. While this marks an increase from just over 1 percent in 2016, growth has been slow. The vast majority of reserves remain in either US dollars (over 60%) or Euros (around 20%). 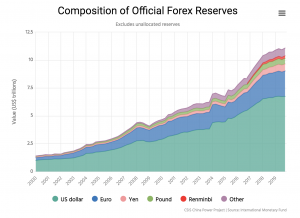 Creditor to the world…

China has been the world’s largest creditor for a while now, in 2017 it was more than twice as big as the World Bank and the IMF combined. Much of it was still USD or Euro denominated but eventually the creditor tends to set the terms. It was not just to EMs, as the map below shows developed economies has increasingly come to rely on China for financing.

The way of the fait accompli…

The role of the USD is ingrained in our current global financial system and its role as reserve currency of ‘choice’ is still strong, but the natives are getting restless. It is telling that the  demand for the ‘global reserve currency’ at the fundamental and organic level of trade has been eroded to a large degree and that it now remains dominant in the spheres that can be determined by diktat (reserve currency holdings) and the more fickle financial flows that are enforced by its deep, liquid financial markets, institutional know-how and related infrastructure.

As to the saying by Confucius; “The man who moves a mountain begins by carrying away small stones.” The process of change will be slow and gradual and then suddenly very fast. That is the way of the fait accompli.

In this week’s edition, Nikolas Joyce, our Co-Chief Investment Officer, dives into the standard causes of a rising dollar and why, at least in the short-term, we may see King Dollar holding on to its throne.

The green line in the illustration below is the Dollar Index. The swing low in GDP momentum corresponds to the high in the Dollar Index. As the year over year comparable come in, there could be the beginning of a trend reversal.”

“Lastly, negative effect on international returns. A rising USD crimps returns by US nationals abroad.  There is also a negative impact of earnings on US companies with larger international operations. The rising dollar puts a hold on inflation since foreign goods cost less.

US GDP momentum, rising rates relative to the RoW & the negative effect on international returns for US investors and corporations are the ‘vanilla symptoms’ of a strong Dollar.

The one I don’t like to think about is the value of debt held by foreigners. If China is the largest holder of US Govt debt, what is their motivation?  Do they have a proxy vote on the strength of the dollar? If the dollar continues to appreciate the Chinese balance sheet is stronger and their exports cheaper for US corporations and consumers. Maybe this aligns the PROC interest with the US interest since, historically, the US has had a strong dollar policy. It’s a complex and fascinating relationship to observe and a key one for the global economy and investment markets.”

Read our Strategic Thoughts piece on: How to navigate FOMO & the emotional financial journey of the markets, which was selected for the Catalyst Insights platform recently:
https://catalyst-insights.com/an-emotional-financial-journey-the-story-of-the-lizard-brain-and-the-semiconductor/

Learn about the value of our surging amounts of E-Waste globally:
https://unu.edu/media-relations/releases/global-e-waste-surging-up-21-in-5-years.html#info

Learn about the common denominator of success:
https://fs.blog/great-talks/common-denominator-success-albert-gray/