The Value of Water

Carl Sagan once famously said, “The cosmos is within us. The nitrogen in our DNA, the calcium in our teeth, the iron in our blood, the carbon in our apple pies were made in the interiors of collapsing stars. We are made of starstuff.”

This beautiful sentiment is true, but the lion’s share of our constitution is not nitrogen, calcium, or iron. It is water. Almost 60 percent of the human body is comprised of water. Our brains and hearts, those organs that give us the ability to think and love, are composed of 73 percent water. Humans can survive weeks without eating food, but without water, you’d be lucky to survive more than a few days.

Even at the macro level, water is life. It is hardly a coincidence that the world’s first civilizations were built along rivers like the Yellow, Tigris, Euphrates, and Nile. The source of American power is the Mississippi River; the bedrock of Chinese power is the Yellow, Yangtze, and Pearl Rivers.

Water giveth, and it also taketh away. The UN’s Intergovernmental Panel on Climate Change (IPCC) published a foreboding update to its climate change assessment last week, and one of its scariest conclusions was that previous reports had underestimate the potential for sea-level rise. In an intermediate scenario, sea levels are not projected to rise over 2 feet (rather than 1.5 feet), and in some more extreme scenarios, sea levels might rise by as much as six and a half feet by the end of the century.

The recent harrowing videos of extreme flooding in places like China, Turkey, and Germany are balanced by the carnage wreaked by lack of water, with its deadly fires and crop destruction in places like Greece, Algeria, and Canada. Too much water means death. Too little water also means death. Even mere changes in the flow of water can spell catastrophe. For being made of starstuff, we are rickety pieces of craftmanship, at the mercy of a resource that even modern technology struggles to control.

A population density map of the United States. Note how much of the U.S. population lives on the coast, all of which would be swallowed if sea levels rose 6 feet. 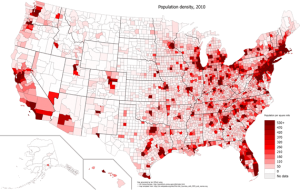 Assume for a moment that an intelligent alien civilization discovered Earth and wanted to make first contact. Assume also that this alien civilization does not have water on its home planet and adapted to life in a manner completely outside of the bounds of what humans know about biology. Wouldn’t those aliens assume, knowing little else about the human species, that water – the source of life and power and prosperity and comfort – would be the most precious commodity on Earth? That different tribes of humans would prioritize, defend, and value water more highly than all else?

No doubt these alien anthropologists would be surprised to discover precisely the opposite: that despite water’s immense importance that in most parts of the world, it is treated as a mere convenience.

Economists believe they have resolved this so-called “paradox,” using phrases like “marginal utility” and “relative value” to explain how it is that a sparkly piece of carbon is valued above so much more than the substance without which life is impossible, but the cognitive dissonance remains.

A map of land vulnerable to desertification.

Of course, the world does not lack for water. Precisely the opposite: 71 percent of the Earth’s surface is water. 97 percent of that water is found in salty oceans that we can’t drink, use to grow crops, or employ in most industrial cases.

Even so, advances in water desalination technology may presage a future in which newly arid regions have no choice but to try and pump sea water into the hinterlands to provide drinking water, electricity, and to grow crops.

That, of course, is easier said than done. Even if you could transport the water you need from where it is plentiful to where it is scarce, desalination requires a lot of energy (around 15,000 kilowatt-hours of power for every million gallons of fresh water produced).

And then there is the cost. Though desalination costs have decreased in recent years, but not to the point of being a cost-effective solution for most countries. Desal plants cost billions to construct, and yields are about an acre-foot of water for every ~$2,200 if you’re lucky. You’d need an awful lot of diamonds to keep paying that bill, though when a population gets to the point where access to water is insecure, relative value spikes, and the value of desalination “goes to the moon.”

Desalination is the new fad.

Of course, this is hardly a simple story, nor is climate change and the attendant effects it will have on water scarcity set to be disastrous for everyone equally. As you can see on the map below, while freshwater access has become a serious issue in places like the Middle East, India, and parts of North and South America, other parts of the world will do well. The same is true of agriculture; Canada and Russia look primed to become new breadbaskets even as crop yields call into question the future viability of life in parts of Africa and South Asia.

A map of the future of water – red is where fresh water sources are decreasing, blue where they might increase. 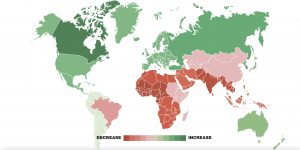 How should investors make approach this? 2020 wasn’t just the year of COVID-19, it was also the first year one could participate in a water futures market in California. Considering the human species has figured out a way to commoditize just about everything, it is perhaps surprising that water is remarkably not commoditized.

Even when it comes to the ever-increasing breadth of exchange-traded funds, the water ETF universe is comprised of just four funds with assets of more than $50 million – $PHO, $FIW, $CGW, and $PIO. (Let the record show this analyst owns a small amount of $PHO and $PIO in his personal portfolio.) For the most part, these ETFs comprise water utilities or industrial stocks, some of which only have a tenuous relationship to water in general.

Even if you are bullish on the idea of water as an investable commodity, how to express that idea as an investment thesis isn’t much clearer today than it was when Adam Smith was writing The Wealth of Nations. 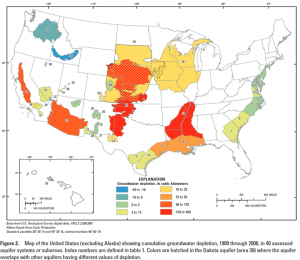 Which, in a sense, brings us back to the same question Adam Smith was wrestling with centuries ago, namely, how to value water, and how to understand how humans will define their relationship with water in the future. Water (along with food and hydrocarbons) is one of the three primary commodities that will stand the test of time.

Perhaps we can begin to lay down a few axiomatic hypotheses to test and explore. Note that these are just hypotheses, and necessarily simple ones at that. If you can’t sum up a hypothesis in a single sentence, it probably isn’t a very good hypothesis.

Even stars need to drink. Long-term enduring trends are in place and gathering pace and there is an investable universe forming in this crucial area, investors should take note.