Why Iron Ore Prices Mean More Than You Think

If you were a commodities-focused investor and had success over the last decade, iron probably had something to do with your performance. Indeed, according to this chart from S&P Global Platts below, iron ore futures “drastically” outperformed most other metals and mining equities since 2015.

Note, however, that the data in the above chart stops in February 2020. If you got off the train in February 2020, you missed a wild ride. Let’s zoom out a bit and look at the global price for iron ore from January 2007 to November 2021.

Like many commodities we’ve covered in this series, iron “went to the moon” in 2020, no doubt because of pandemic-related supply chain disruptions and subsequent recoveries and government stimulus policies. For our purposes, however, it’s more interesting to ask why iron ore was already in outer-earth orbit in 2020. After all, in the chart above, you can see that the global price for iron ore more than quadrupled after the 2008 financial crisis. Iron ore prices returned from whence they came…only to start a new rally at the end of 2015.  What happened in 2008 and 2015 that made iron ore – a highly abundant resource critical to the manufacturing of some of the least expensive of the world’s metals (iron and steel) outperform all other metals?

That question can be answered in one word: China. This tremendous infographic from the folks over at Visual Capitalist sums up the point better than mere words ever could. 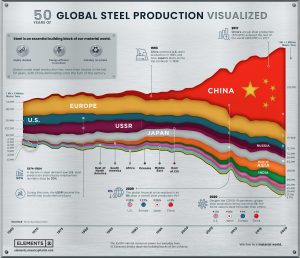 Let’s pause here for a moment and offer the uninitiated a few basic things they need to know before we can go any further. Iron is an element – one of the most abundant on earth, but it doesn’t occur in nature in its useful metallic form. Metallic iron is derived from iron ore. Steel is an alloy – the result of a combination of iron and carbon. Because of iron and steel’s attributes, mainly their strength and relative cost, there aren’t a whole lot of alternatives to them when you are engaging in large-scale infrastructure projects. Indeed, 90 percent of the metal produced annually by humans is iron – a testament to its versatility and importance.

And it is perhaps most important to the country that has been building infrastructure on a scale unsurpassed in the history of civilization – China. That isn’t hyperbole. In a roughly two-year period between 2017-2019, China manufactured more steel than Britain – the country that practically invented modern steel manufacturing – had since 1870. Until recently – as in, until the last few months – China was producing more steel than the rest of the world combined. A graph from the World Steel Association brings into sharp relief how dominant China’s position in global steel production has been – but also suggests that something has begun to change. 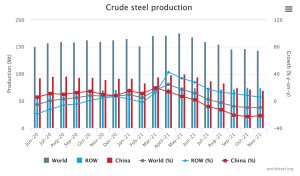 Before we get to what is changing, though, let’s remember what happened in the past. Remember that when you started reading this article, you saw that global iron prices increased significantly in both 2008 and 2015/2016. It is not a coincidence that these were both tremendously challenging periods for China’s economy. 2008, of course, was a challenging year for the global economy. 2015-2016, however, was a uniquely Chinese problem, marked by a stock market crash, cryptic policy references to “L-shaped growth,” and behind the scenes power struggles.

The Chinese government’s answer to both periods of crisis was stimulus – much to the relief of the rest of the world. In 2008, the Chinese stimulus package was the largest in the world – equal to almost three times the size of a similar effort in the United States. China’s 2015/2016 stimulus was not quite as dramatic, but still amounted to Beijing pouring trillions of dollars into hundreds of infrastructure projects. Here was a spending spree that really did trickle down into the Chinese economy, as real estate speculators kept building fueled by debt and speculation, creating the ghost cities that China became famous for. It also created an insatiable appetite for iron, and by extension steel.

The struggles of real estate developers like Evergrande that you’re reading about on the front pages of your morning newspaper lie in those same developers defied Beijing’s attempts to put the genie back in the bottle in 2018. The Chinese Communist Party knows it can’t run the Chinese economy like a Ponzi scheme for ever – that would create an existential threat to its ability to govern. And that is why, in 2021, the Chinese government started making an example of anyone and everyone who was openly flaunting old regulations that hadn’t been enforced consistently, or new regulations designed to increase the power of the central government.

Which brings us to the current moment. There is a shockingly wide array of predictions for iron ore prices in the year ahead. The Australian government is taking a conservative view, planning its budget around iron ore prices at $55 per tonne by the end of Q2. Fitch isn’t quite that pessimistic in the short-term – but in the long-run, it assess that iron ore prices are in a “multi-year down-trend” due to increased supply from Brazil and Australia and lower demand from China. Contrast that with other voices, like the Tribeca Investment Partners’ Global Natural Resources Fund, which is calling for a rally in Q1 to $150 a tonne or even higher. Esteemed organizations like Morgan Stanley, UBS, and ING, meanwhile, are all landing squarely in the middle of these two outer limits. 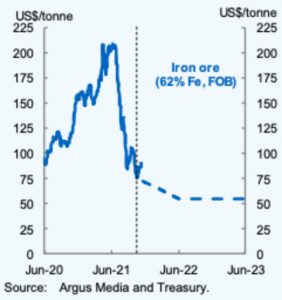 Most, however, seem to agree that iron ore prices will hinge on China. The consensus expectation is that China is poised to open the credit spigots again after a difficult year. But investors comforting themselves with palliative notion that China is about to pull a “2008” or a “2015” out of its policy hat again might want to think twice. China is changing, and while it is promising to support growth to a greater extent in 2022 than it did in 2021, it is primarily interested in “stable growth.” It is also explicitly not interested in fostering conditions for another debt-fueled property bubble that makes developers rich while not providing affordable housing for the hundreds of millions of Chinese citizens eager to partake in a greater share of the country’s prosperity.

Before we leave you with that thought, however, let’s consider one more set of data from the World Steel Association to complicate the picture even further. This is the top ten steel producing countries in the world and their year-on-year growth rates, for both November 2021 and for the period Jan-Nov 2021.

Note that year-on-year, Chinese steel production has declined considerably. The reason is that China imposed curbs on productions in 2021 and will likely keep those curbs in place until after the Winter Olympics at least. But that’s not the interesting part of the story. Look at the positive figures for Japan, the U.S., Russia, India, and Turkey. The U.S. and India are particularly interesting, considering the U.S. is going to pass a major $1+ trillion infrastructure bill at some point, while India just announced over $1 trillion of its own infrastructure building intentions. COVID-19 taught many nations of the world not to rely solely on global supply chains. Combine that with stimulus driven recovery policies and modest growth from China and perhaps you get more demand for iron and steel than the market is expecting.

That’s speculative, of course. The key point we want to leave you with is that the geopolitical situation that led to iron ore’s price increases in 2008 and 2015 has irrevocably changed. Past performance is not a guarantee of future results. For better and for worse, China is not going to be the sole driver of global iron ore, iron, and steel prices going forward. If you can’t change your perspective, you’ll keep chasing the past, and that is usually not a recipe for success.