From Macro to Micro: How social unrest in South Africa could cause havoc for global supply chains…

Unless you’ve been living under a rock, you no doubt heard about the political and social unrest that convulsed South Africa last week. To make a very long story short: former South Africa President Jacob Zuma was arrested for failing to appear before a government commission looking into corruption during Zuma’s nine-year presidency. Zuma’s supporters expressed their disapproval violently; riots and looting spread throughout Zuma’s home province of Kwazulu-Natal as well as Gauteng, South Africa’s political and economic center. At one point, the South African government deployed 10,000 soldiers and called up 25,000 more reserves just in case they needed to restore their monopoly of force. Supply chains seized up as did operations at some South Africa ports.

South Africa’s domestic politics are fascinating and important, but let’s leave them aside for a moment to focus on an angle of this story that no one else seems to be, distracted as they are by the “anarchy and mayhem” (in President Cyril Ramaphosa’s words) that briefly took the country hostage. Last month, we took a closer look at the geopolitically scarce commodity cobalt. As a refresher, the Democratic Republic of Congo was responsible for 83.3 percent of global cobalt exports and over half of global production last year. South Africa is a major producer and exporter of three geopolitically scarce commodities: platinum, manganese, and chromium. The latter two will only become more important in the future due to their importance in clean energy technologies.

South Africa’s stranglehold on platinum production is similar in scale to the DRC’s de facto monopoly on cobalt. As the USGS chart below shows, South Africa has dominated platinum production since 1995, and according to data from Merchant Research and Consulting, that dominance has remained constant up to 2021. 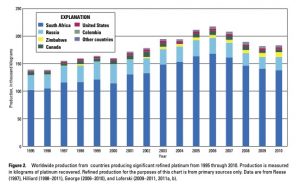 The prospect for identifying alternative mines for platinum-group metals is not very good. 91 percent of platinum group metal reserves are located in South Africa, and the U.S. imported 43 percent of its platinum from South Africa in 2019. Platinum-group metals, which include palladium, iridium and rhodium, are crucial for everything from catalytic converters to semiconductor manufacturing, not to mention whatever nice jewelry you bought for your significant other. Besides relatively small production in Canada and the U.S., the other two major sources of palladium and platinum last year were Zimbabwe and Russia – not exactly a picture of a secure supply chain.

Map of locations where Platinum group metals were produced and facilities developed (2010). 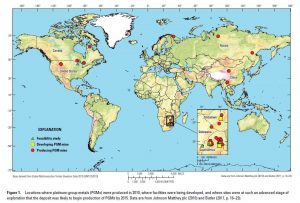 Moving onto manganese ­– traditionally important in steel production but of increasing importance in clean energy technologies (especially offshore and onshore wind) – South African production is also without peer. Global dependence on South African manganese is not quite as stark as on platinum, but South Africa is still far and away the largest producer in the world while also accounting for 40 percent of global reserves. South Africa’s share of global exports in 2020 was just under 50 percent – making it the top manganese exporter in the world, exporting more than the next five countries combined (Gabon, Brazil, Ghana, Ivory Coast, and Malaysia…again, not a supply chain for the faint of heart). 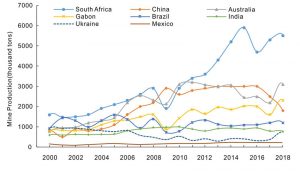 And then there is chromium, again, crucial to the production of stainless steel, but increasingly important to the emergence of clean energy technologies, especially onshore and offshore wind as well as nuclear. World chromium reserves are 95 percent concentrated in Kazakhstan and southern Africa, with South Africa alone accounting for 40 percent of total global production in 2020. The world has plenty of chromium to meet demand but mining chromium and getting it to where it needs to go is easier than done, and meanwhile, there are few viable substitutes for chromium. And if you can’t tell the theme…the alternate sources of chromium aside from South Africa aren’t exactly bastions of reliable production: Kazakhstan, India, and Turkey round out the top producers.

In truth, we could keep going. Other ores that South Africa is the top global export source for include titanium (28 percent of world exports) and niobium (35 percent). South Africa also produces significantly quantities of gold, iron, and silver. Which, in a sense, brings us back to where we began. The easiest part of a macro approach to commodities investing is identifying the commodities people are using or will use in the future.

The hard part is identifying the countries that can capitalize on where the winds of the global economy are blowing. South Africa has a lot going for it, but as last week demonstrated, it also has a number of obstacles to overcome, from concerns over government corruption to record high unemployment figures (75 percent of people under the age of 24 are currently without a job), to the legacy of apartheid and the unequal structures in terms of land ownership, wealth, and education young South Africans have inherited. How quickly the macro-questions become micro-questions; like whether South Africa can use this latest crisis to spur change? If Ramaphosa can purge the South African government of Zuma’s cronies? Whether inequality and social divisions are too well-rooted to prevent the emergence of a more equitable South Africa for all build on the foundations of Nelson Mandela’s vision?

With South Africa, at this juncture, there are more questions than answers and investors – not just in commodities – need to explore and seek to understand the far-reaching implications of a South Africa in flux. The global economy is an interconnected and complex system and it pays to understand the key nodes and their relationships.