In this week’s edition Jacob Shapiro, our Global Macro Adviser, takes a look at Latin America.

When European colonists discovered the “New World,” they were primarily excited about the natural resources they could extract from it: especially gold, silver, and other precious metals. Present-day Northern America was actually considered the lesser prize: the vast mineral resources of what became Latin America attracted most of the colonizers’ original attention.

As a result of its natural blessings, Latin America has been trapped in a perpetual boom-bust commodity cycle for centuries. When times are good and commodity prices are high, Latin America enjoys wealth and prosperity.

Indeed, at the turn of the 20th century, Argentina was one of the most prosperous countries in the world. On the eve of World War I, Argentina was richer than Germany, and in France, “riche comme un Argentin” was a phrase used to describe the uber-rich.

Unfortunately, the corollary has also been historically true. When the commodity bubble inevitably pops, the economies of Latin American economies go bust as well.

The result is a constant political tension at the heart of most Latin American countries. Like most countries with ample natural resources, Latin American governments will spend profligately when commodities prices are high. Indeed, its citizens understandably expect the government to distribute their national good fortune in the form of lower taxes, government-sponsored services, or subsidies for basic goods.

When commodity prices collapse, however, many of these subsidies and services reveal their true colors, as they are not just funded with capital on hand but borrowed from the future under the assumption that the good times will continue to roll. As the debts pile up, new governments sweep in, clean up the inefficiencies, and apply fiscal discipline…that is, until commodities prices surge again, and the vicious cycle repeats itself.

Egged on by COVID-19 disruptions, commodities have clearly entered a new inflationary cycle. For the first time in over a decade, copper prices are reaching new record highs. The UN’s Food Price Index is at its highest since May 2014 and has increased for 11 consecutive months and counting. Even oil prices are rising and flirting with $70 a barrel – prices not seen since at least April 2019.

It is hardly a coincidence, then, that we are seeing major political pressure building throughout Latin America. Obviously, the concerns are specific to each country – all politics is ultimately local at the end of the day – but from the broadest level, it seems that the entire region is moving toward the left. Having endured a global pandemic that has been disproportionately deadly for Latin America and endowed with the resources the whole world needs, that is hardly surprising.

To get a sense of how important Latin America is when it comes to global commodities trades, let’s look at a view graphics. 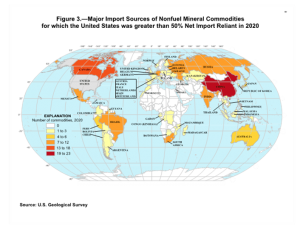 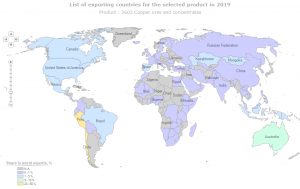 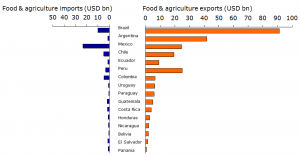 Of course, we could have dumped hundreds of charts and maps and graphics on you to make these points, but hopefully these three – demonstrating how critical Latin America is to nonfuel mineral exports, copper exports, and food exports gets the point across.

Now take a step back and think about some of the seemingly disparate political developments in the region over the past few months:

The ideological component of this region-wide political shift is what the media narrative will focus on – and couldn’t be more boring to us. Call it Marxism, socialism, Leftism, populism, whatever you like – the name is immaterial.

Instead, keep your eye on the macro-shift unfolding in front of your eyes. Commodity prices are going up. The world needs more of what Latin America can sell – a lot more of it. Meanwhile, political instability is increasing throughout Latin America, and the general direction is toward the left – a sign that restless citizens want to make sure their governments include them in this latest economic boom.

We began with “riche comme un Argentin.” It is only appropriate to conclude with another French aphorism: “Plus ça change, plus c’est la même chose” – The more things change, the more they stay the same.

Before the Battle of the Pyramids in 1798, Napoleon said, “From the summit of these pyramids, forty centuries look down upon you.” In this century, the glorious tombs for Egypt’s long-dead pharaohs will preside over the country’s influence in the global payments space. Billions of dollars in remittances flow to Egypt every year. The country seems to be ready for cryptocurrencies but it hasn’t received much attention by crypto observers. An Egyptian founder of crypto technology platforms, Hany Rashwan, said,“There are no easy ways of purchasing crypto in Egypt.” In fact, the Central Bank of Egypt has warned against cryptocurrencies. Without recognizable retail adoption of crypto and no CBDCs in Egypt, institutional banks will have to lead the way. Recently announced, the National Bank of Egypt has partnered with RippleNet and Lulu Exchange on cross-border payments from the United Arab Emirates to Egypt. The adoption of innovative global payment solutions will boost Egypt’s admired status on the African continent. Tarek Hassan Amer, governor of the Central Bank of Egypt, has already been praised for his leadership. Centuries look down upon Egypt’s next steps with technologically-minded global payments. 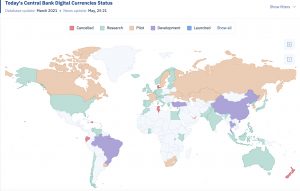