What A Coup in Guinea Really Means for Aluminum

Our series on critical mineral commodities is focused on the future. We are looking at long-term supply and demand fundamentals, cutting edge technological uses, and potentially brittle supply chains to serve food for thought for savvy macro investors. Of course, we are also pulling back the curtain, if ever so slightly, on some of our own internal process for considering these issues. (If you missed previous installments of this series and are new to The Strategic Funds, consider checking out our recent overviews of nickel, copper, and water.)

Occasionally, however, something happens in the world that underscores the vulnerability of a particular commodity now. Suddenly Mr. Market discovers that a given commodity or resource is exposed to “geopolitical risk,” which as far as we can tell is used by financial media as a catch-all term for when bad things happen in far-away places that most investors could not point to on a map. That is precisely what happened last week, when Guinea experienced a military coup d’état. Indeed, it is the most attention Guinea has garnered at the global level since the last time it had a coup d’état in 2008. Conrad called this “fascination of the abomination”…but we digress.

As a result of the coup in Conakry, we decided to change the rough order of our series and push aluminum to the top of the stack. The reason is relatively simple: Guinea is the largest exporter and the second-largest producer of bauxite in the world. It also has the world’s largest bauxite reserves. Bauxite, of course, is the world’s primary source of aluminum. Aluminum is the most common metal on Earth, accounting for roughly 8 percent of the earth’s crust, but it does not occur naturally very  much, and therefore has to be chemically processed to produce alumina (aka aluminum oxide). As bauxite goes, then, so goes aluminum.

It is not hard to see that aluminum prices have surged since the beginning of 2020. Even so, before the pandemic made practically all commodity markets lose their faculties, aluminum prices were in a pronounced downward trend. Aside from a brief spike in 2018, prices had steadily declined since 2011, and while future projections indicated a potential mismatch between supply and demand on a medium-term time horizon, relatively few people were worried about aluminum prices “going to the moon” as recently as two years ago.

Those that were concerned, however, knew one thing that other investors didn’t know. They knew that global supply chains for bauxite were in a state of flux and that bauxite could represent a significant bottle neck in global supply chains. On the map below showing top exporting countries for bauxite in 2020, Guinea sticks out like a sore thumb – a tiny country on the tip of Western Africa with a greater-than-50 percent share in global bauxite exports. Consider that just about every country near Guinea has faced major unrest in recent years (Niger, Nigeria, Mali, Chad, etc) and it doesn’t take a geopolitical export to conclude that this supply chain had an elevated risk of disruption. 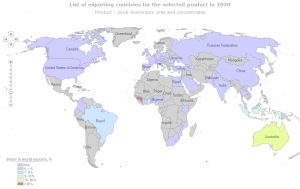 There are a few other things to note from this map, however. The first is Indonesia, which is growing into a mineral commodity powerhouse due to relatively disciplined policy making. As we explained in our piece on nickel last week, Indonesia passed a Mining Law that required companies to process ore locally before shipping it abroad. As a result, Indonesian bauxite and aluminum exports have declined precipitously since 2010. Indonesia is playing a long game as it attempts to become a vertically integrated aluminum producer, one that can mine and process bauxite into finished aluminum products. Guinea’s government, to its credit, has found ample demand for its bauxite, which is why its exports have more than doubled since 2016, but the future of aluminum markets will have just as much to do with countries like Vietnam, Indonesia, and the UAE. 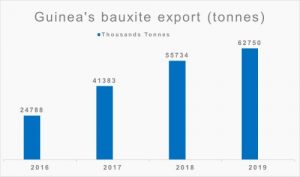 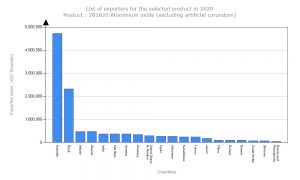 One more thing to keep in mind here is the way that aluminum prices intersect directly with macroeconomic issues in China. While many multinational companies are present in Guinea, China’s investment in Guinea has been particularly large. In 2017, China agreed to loan Guinea $20 billion in return for bauxite concessions. China’s ongoing diplomatic and trade dispute with Australia, which used to be China’s go-to source for bauxite and iron, has increased Guinea’s importance to China even more.

This is something new in Chinese history – which is saying something considering just how long Chinese history is. China had the luxury of imagining itself as the center of the world because China was a world unto itself. China never needed to import things from abroad; it was largely self-sustaining for much of its history. For the first time in Chinese history, that is changing. Like Japan in the late 19th century, China is discovering it needs things from abroad to maintain its industrial economy. Accompanying that need is the fear of being cut off from the things it needs – and it’s therefore driving significant Chinese military spending and diplomatic engagement throughout the world.

This is an easy story to miss if you aren’t paying attention, but it is lurking behind almost all the mineral stories we are telling in this series and is especially pertinent for Guinea. China’s interest in Myanmar and in supporting the military junta there, for instance, is tied to its mineral investments in the northern part of the country and an oil pipeline through Myanmar that could lessen Chinese dependence on the Strait of Malacca. In Guinea, China took the rare step of initially criticizing the coup. Now that it seems that the junta will protect Chinese interests, the state-run Global Times also conceded that the risk to China’s interests in the country remained “manageable.”

The lessons here are threefold. First: don’t get distracted from your long-term focus by shiny things. Ephemeral price spikes due to the market badly misunderstanding geopolitical risks are more a matter of luck than skill or insight. Second: even an element as widely used and available as aluminum is not necessarily secure from a price perspective. When you compare the uses of aluminum and overlay its significance to the global economy over its supply chain, you begin to understand just how many global inputs are necessary to understand to begin to appreciate the related opportunity and the risk. Lastly: pay attention to what China is doing, not what the media is saying or what its wolf warrior diplomats are tweeting.

Put those pieces together and suddenly you find yourself at a roundabout of alpha, where macro forces and micro insights offer a dizzying number of options and roads to take. Indeed, this series isn’t meant to give you clarity, it is meant to confound you, to open your mind to the possibilities that you didn’t even know exist. Only once your mind is sufficiently aware of how little you know can you do the hard work of formulating a concrete investment thesis. At The Strategic Funds we embrace this challenge every day and develop access points for Accredited Investors to overlooked opportunities whereever our team finds them.