“A good writer should know as near to everything as possible. Naturally he will not. A great enough writer seems to be born with knowledge. But he really is not; he has only been born with the ability to learn in a quicker ratio to the passage of time than other [people] and without conscious application, and with an intelligence to accept or reject what is already presented as knowledge.” – Ernest Hemingway, Death in the Afternoon

With the above sentiment in mind, we turn our attention, this week, to the role hydrogen will play in the global production of energy in the future.

Before we can deal with hydrogen directly, however, let’s recap the path we’ve taken. Thus far in our commodity series, we have focused primarily on commodities tied to energy production. (If, for instance, you missed previous installments on the future of nuclear power and on the fundamentals behind rising natural gas prices, click here or here for more.) We have also taken a deeper look at many of the commodities crucial to cutting-edge battery technology, like cobalt and nickel, for example.

This focus belies a certain bias. For the record, bias isn’t a dirty word. We all have biases. (In the immortal words of Rustin Cohle, everybody judges – all the time – and if you have a problem with that, you’re livin’ wrong.) The trouble with biases is when you try to sweep them under the rug and pretend like you’ve achieved a higher plane of perfect objectivity. The more transparent you can be about your biases, the better the chance you’ll be able to overcome them and see with a truly strategic perspective.

The bias embedded within our focus thus far has been toward batteries as the key to capitalizing on the potential of renewable energy. The problem with renewables like solar and wind is that sunshine and wind gusts aren’t, in and of themselves, a fuel source – nor are they constantly and readily available. Hydrocarbons became the dominant fuel of the modern economy because the energy stored in them can power cars, factories, and networks. They can be extracted cheaply and transported where necessary (or to be more precise, wherever someone is willing to pay for them).

Much of the current thinking about the future of renewable energy is that for renewables to fulfill their promise, battery technology must advance to the point where your Tesla can hold enough of a charge to get you as far as a tank of gas – and that you’re bound to find a recharging station for your battery somewhere along the way. Without batteries, you can build all the solar and wind capacity in the world you want, but if you don’t have a way to store, transport, and use that energy as needed, you won’t achieve electrification and/or decarbonization.

The downside to batteries is trading a few risky supply chains for fossil fuels for a lot more and riskier supply chains with environmental consequences arguably just as bad. In 2020, the Democratic Republic of Congo accounted for 83.3 percent global cobalt ore exports. (Cobalt is in the lithium-ion battery that powers your smart phone.) Most are surprised when they find out that mining cobalt in the DRC is bad for the environment and involves large-scale child labor, as many as 40,000 children, some as young as six years. Much is made of China’s dominance in the global market for rare earth elements – analysts tend to forget China built that dominance by toxifying its land for the next 50-100 years to do so.

Today, hydrogen is largely used for industrial purposes, either in oil refining or the production of ammonia fertilizers. (If you didn’t read our missive on fertilizers, click here). But hydrogen has a lot more potential than that. Hydrogen can also be used as a fuel. It can be transported via pipelines or ships, just like liquified natural gas. In the words of the IEA, hydrogen’s positive attributes are striking: “it is light, storable, reactive, has high energy content per unit mass, and can be readily produced at industrial scale.” Hydrogen offers an alternative to storing the energy from renewable energy sources in batteries in the form of a clean fuel source that can be retrofitted to our current energy infrastructure. According to one EU study, for instance, current natural gas pipeline infrastructure could be converted to hydrogen pipelines at 21-33 percent of the cost of building new pipelines. 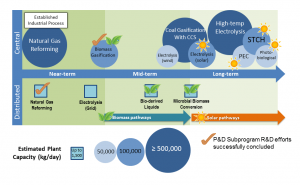 Of course, it’s not that simple. (If it was, previous attempts to make hydrogen the energy of the future in the 1970s and again in the 1990s wouldn’t have fallen flat on their faces.) For one thing, not all hydrogen is created equal. Most of the world’s hydrogen is “grey hydrogen” – i.e., derived from natural gas and produced from fossil fuels, releasing 10 kg of CO2 into the atmosphere for every 1 kg of hydrogen produced. To put that into some perspective, global hydrogen production produces CO2 emissions equivalent to the annual emissions of the UK and Indonesia combined. We should also note that constituent parts of the hydrogen universe also rely on mineral commodities, albeit at a lesser scale than batteries.

Blue hydrogen is produced via a similar chemical process as grey hydrogen – but the CO2 produced is captured and stored via Carbon Capture and Storage. (A self-descriptive name for a process if ever there was!) The holy grail is green hydrogen – generated via a process called electrolysis, which involves separating water molecules into hydrogen and oxygen by applying electrical energy to them – with wind and solar generating the necessary power.

And therein lies the rub. Green hydrogen is still very expensive, as the chart below shows. 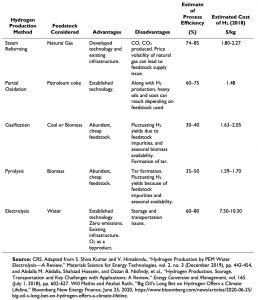 That hasn’t stopped governments from taking tangible steps to realizing hydrogen’s potential. In the last two years, 14 governments released official national hydrogen strategies, with 20 more developing strategies of their own. The IEA estimates that global electrolyser capacity – crucial to the production of green hydrogen – has doubled in the last five years, and that global electricity capacity for green hydrogen by 2030 could reach 54 GW (from 300 MW this year). Part of the story around hydrogen is just how small of a market share it currently possesses, as you can see in the chart below of U.S. electricity generation by source up to 2019 (hydrogen falls into the 1 percent of “other”). Even so, the U.S. just allocated $8 billion to building four clean hydrogen hubs across the United States as part of the Bipartisan Infrastructure Framework. 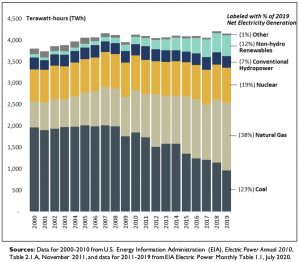 The U.S. has a lot of catching up to do. Blessed with ample energy hydrocarbons due to the shale revolution, U.S. innovation hasn’t been driven with the same urgency as in countries so critically dependent on foreign sources of energy inputs, like the European Union, South Korea, and Japan. Indeed, for the last 15 years, the government R&D budgets of Europe and Japan have dwarfed China and the U.S. when it comes to hydrogen and fuel cell technology. It also isn’t a coincidence that the countries best suited to profit from the increased mineral commodity needs of batteries, like Australia and Chile, are pouring billions into hydrogen projects, and reimagining industrial ports as potential mega-production centers of hydrogen supply to fuel ships and trucks and power plants and industrial centers. 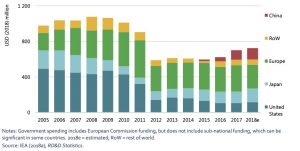 We live in paradigm-changing times, to borrow a phrase from Thomas Kuhn’s “Structure of Scientific Revolutions.” 20 years from now, with the benefit of hindsight, many will look back at the road taken to a (hopefully) more renewable energy paradigm as obvious and kick themselves for not capitalizing on the potential that was staring them in the face. In the periods between paradigms, however – when it isn’t clear what technology will win the day – the options seem limitless, the possibilities endless, with every day promising new technological breakthroughs and advances that will change the world.

In the end, the only thing to do is learn as much as possible, as fast as possible – and position yourself in front of the trend rather than focus on a single silver bullet. Hydrogen, nuclear, solar, wind, renewables, batteries, natural gas – they will all play a role in how we power our lives going forward. The direction of the wave is clear; wait too long, and you’ll miss your chance to ride it.