What a difference a year can make. In 2020, natural gas prices declined to multi-year lows. According to BP’s 2021 Statistical Review of World Energy, prices at U.S. Henry Hub averaged $1.99/mmBTU – the lowest since 1995. Asian LNG prices, meanwhile, declined to their lowest level on record ever. The U.S. Energy Information’s (EIA) global outlook for 2021 concluded that “natural gas prices will remain low compared with historical levels” and that natural gas consumption in the U.S. would continue growing steadily as a result.

As the old Yiddish proverb goes: We plan…and God laughs. Natural gas prices are up 99 percent year-to-date. U.S. natural gas futures are up to $5.105/mmBTU – i.e., they doubled over the last six months and leapt 17 percent already this month. The Wall Street Journal warns in an ominous headline that “Winter Is Still Months Away” (which, to be frank, seems like a missed opportunity). Goldman Sachs analysts believe a cold winter could cause another doubling of prices, to a whopping $10/mmBTU. (Considering a Goldman Sachs analyst accurately predicted the current price spike, perhaps their crystal ball should be weighted more heavily than most.) 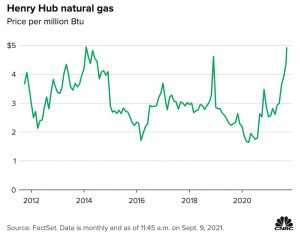 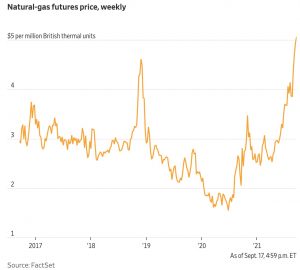 Color the EIA unimpressed. According to its September 2021 Short-Term Energy Outlook, the surge in U.S. prices, at least, is explicable and ephemeral. Hotter temperatures in August combined with extended production declines due to Hurricane Ida created a perfect storm. (Apologies for the pun.) Now that both are (mercifully, in the case of Ida) matters of history, the EIA expects the Henry Hub spot price to average $4.00/mmBtu in Q42021, sustained mainly by an increase in LNG exports and relatively flat production.

If the EIA is right, averages U.S. prices next year will be 32 percent less than the futures price at the end of last week. Then again, if William Miller had been right, perhaps none of us would be here.

In recent weeks, our series on strategic commodities has focused on metals like aluminum, copper, and nickel. These commodities are already critical to modern industrial life but have become imbued with new potential due to their importance for emerging technologies, especially those meant to wean human civilization off the hydrocarbons that have powered it to such great heights in the 18th century. (Yes, another pun.)

The spike in natural gas prices, however, impels a return to first principles. At the outset of this ongoing series, we defined three classes of commodities that human  beings will need no matter what is happening in the world: water, food, and hydrocarbons. (Click here if you need a refresher on our commodities multiverse.) The spike in natural gas prices behooves us to take a closer look at this important market, one that is often carelessly associated with its more pollutive cousins, namely, oil and coal.

Like natural gas, oil and coal usage declined markedly in 2020, driven by lower demand and new impetus to use pandemic fiscal stimulus to invest in green technologies. Indeed, global natural gas consumption also fell almost 2.3 percent in 2020. That, however, obscures the extent to which demand for natural gas is growing. Natural gas’s share of primary energy usage continued to rise during the pandemic, reaching a record high of 24.7 percent in 2020. The EIA projects that natural gas and renewables share of energy consumption will grow in tandem over the next three decades. 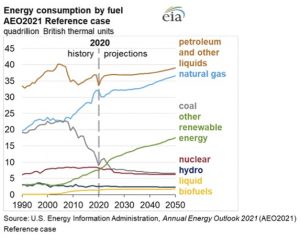 The EIA notes that U.S. consumption of natural gas will likely decline in 2021 by 0.9 percent year-on-year – but that is not because of a reduction in demand, perse. In the U.S., when natural gas prices increase, electric power generators switch to coal. Considering that natural gas releases half as much CO2 as even the “cleanest” coal, it is a matter of “when,” not “if,” the U.S. government decides to administer the coup de grâce to its coal industry. The number of coal workers in the U.S. has declined by over 75 percent in the last 36 years, not because U.S. government policy has been particularly green (quite the opposite), but because the U.S. has a lot of natural gas.

The center of gravity of the current spike in natural gas prices, however, has little to do with the United States. Natural gas prices are surging upward largely due to acute concerns over shortages in European natural gas markets. In the UK and the Netherlands, natural gas futures spiked over 10 percent last week. And the first signal that something was imbalanced in global gas markets came as early as this past January, when Asian spot LNG prices hit record highs due to unexpectedly prolonged cold weather and reduced production due to the COVID-19 pandemic.

Geography is a powerful fundamental, especially when it comes to moving a resource like natural gas from Point A to Point B. That is, of course, what makes hydrocarbons so valuable – if you have enough supply, you can ensure continuous energy generation, unlike more fickle mistresses like the sun and the wind. The largest global consumers of natural gas are Europe and East Asia, while the producers are largely located in the Middle East, Africa, and the Western Hemisphere, as this excellent map from BP’s annual statistical review shows. 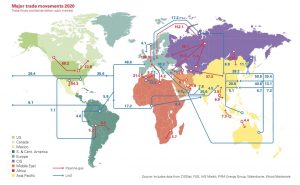 The European Union is already crying foul, even calling for the European Commission to investigate Russia’s Gazprom on allegations that it is manipulating natural gas prices. Gazprom of course rejects this, but also notes that Europe’s gas storage levels are lower than normal and that gas prices could, in the near future, “beat the records which they had already achieved.” Meanwhile, the British government has vowed to “protect customers during a time of heightened global gas prices.”

The U.S.-German bilateral relationship frayed considerably under the Trump administration when the U.S. hoped to persuade Germany to block construction of Russia’s Nord Stream 2 pipeline, which will allow Moscow to provide its natural gas to European markets without having to traipse through Ukraine. The U.S. was unsuccessful, as Germany views securing the EU’s natural gas supply as a matter of strategic necessity. Even Germany, which has been at the forefront of policies promoting environmental protection, is unwilling to countenance a future without natural gas. 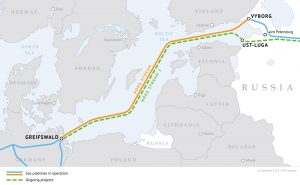 Where do natural gas prices go from here? There are projections from reliable sources indicating everything from a decline in prices to further doubling. A bet on the latter is a bet on the weather, which even in the 21st century humans have a poor record of predicting. With prices already elevated, and media sensationalism frothing, it is hard not to think of price spikes in other commodity markets since the pandemic began, which resolved themselves over a period of months. (Remember lumber? We looked at that irrational price spike here.) The immediate opportunity may have already passed.

As always, the more interesting question is the macro-outlook, which is more amenable to projection than weekly or monthly futures markets. Natural gas demand is going to increase in the coming years and decades – it is simply a question of “how much.” The IEA projects 1.7 percent annual growth; McKinsey predicts natural gas demand will increase 0.9 percent, peak in 2037, and only then begin to decline. Natural gas is the cleanest of the hydrocarbons, and most importantly, the pipeline infrastructure necessary for transporting natural gas can be retrofitted for cleaner sources of energy still, like hydrogen.

That is a Strategic Perspective for another time. For now, it suffices to say that in the short-term, the price of natural gas will depend on how cold the upcoming winter gets and whether a geopolitical black swan – like renewed conflict in Ukraine or the Middle East – sends an already spooked market into true pandemonium. We can make a case either way, which makes this a market in which skilled hedging is at a premium. Long-term, the rumors of natural gas’s demise appear exaggerated, and opportunities abound…if, that is, if you know where to look.